More Evidence of a Flat Economy

In using income tax withholding as the basis for attempting to understanding Rhode Island's current economic performance, three things must be taken into account. First, income tax withholding is a nominal value, meaning that it does not take inflation into account. Therefore, inflation can distort this indicator, making its performance appear to be better than it really is. Second, there are seasonal variations in the amount of withholding collected throughout the year. To account for this, it is necessary to perform seasonal adjustment. After both of these adjustments have been made, it is possible to meaningfully compare any particular month to any other month. The result, after both of these corrections have been made, is called seasonally adjusted real income tax withholding. To simplify this and what follows, I will simply refer to it as real withholding. Finally, it is critical to remember that, as stated above, withholding is a lagging economic indicator.

First, let's take a look at income tax withholding using seasonal adjustment, but not adjusting for inflation. The chart below shows this (click to enlarge). Its performance of late looks very impressive. Someone using this chart as the basis for determining how well Rhode Island's economy is performing would almost certainly give a very positive vote -- the line of late is clearly sloping upward with a respectable slope. 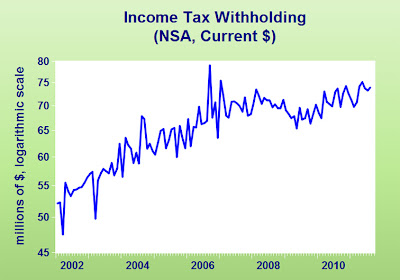 Now for a more detailed look -- place the above chart in the context of the longer-term trend in withholding, as shown in the next chart (click to enlarge): 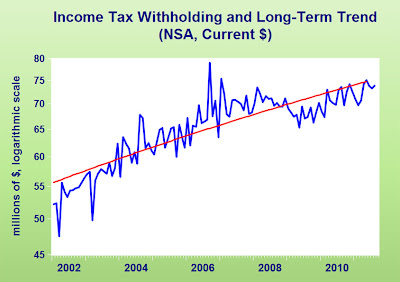 While the recent trend still seems promising, in a longer-term context it is apparent that since 2008, income tax withholding in Rhode Island has remained below its longer-term trend. But can't that just be evidence that this recovery has been relatively slow compared to past recoveries? The answer is yes it can. But since neither of the above charts takes inflation into account, we need to view real income tax withholding before making any final determination on current economic performance based on withholding.

The final chart takes inflation into account, showing real income tax withholding (click to enlarge). I have made the base period the purchasing power of September of 2011 (the most recently available data). Notice how real withholding has failed to break above its recent highs of around $75 million, and that it has remained range bound between $70 and $75 million throughout this entire recovery. I labelled these as "support" and "resistance," respectively, terminology from the technical analysis of markets. So, it is not in any way a stretch to state that during this entire recovery, Rhode Island's real income tax revenue has displayed a flat (horizontal) trend. So, while current dollar income tax withholding has been rising, as the above two charts show, its relatively static real value reflects the fact that current dollar growth has only matched, and failed to exceed, the rate of inflation. 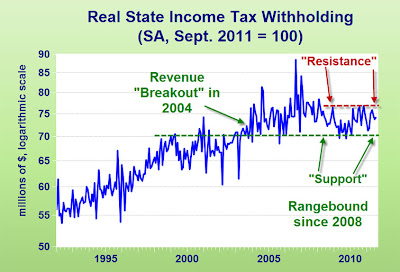 However, that's not necessarily bad news. State budgets are run based on nominal values, and nominal withholding growth appears to be strong up to this point. And therein lies the true caveat: what happens from this time forward?


The answer to this question cannot be adequately determined based solely on the past behavior of any single indicator like income tax withholding, whether nominal or real values are considered. As I have indicated numerous times on this Blog, it is necessary to "hedge" one's bets by using a set of indicators to arrive at a far more educated answer to this question. And that is precisely why I formulated and publish my Current Conditions Index each month (http://www.llardaro.com/current.htm ).

The CCI value for August indicated a contraction value (of 42). If we were to observe a string of several consecutive contraction values, it would then be appropriate to conclude that Rhode Island would indeed have begun a double-dip recession. But we are not there yet. And at this point, I am not willing to make that call.

This is an abbreviated version of the August Current Conditions Index report. For the tables, historical reports, and more information, please visit my web site: http://www.llardaro.com . I made my monthly appearance on Channel 10 this morning. Here is a link to that interview. And, as always, the CCI received excellent coverage in both the Providence Business News and GoLocalProv.com , while as of the time I am writing this post, the ProJo has yet to even mention it.


So much for a potentially strong start to the third quarter! While the Current Conditions Index originally registered a jump to 67 in July from 58 in June, updated data caused July’s value to be revised down to 58 based on New Claims, which moved from a slight decrease (improvement) to a small increase. What could possibly be worse? August’s CCI value fell all the way to 42, a contraction range reading, as only five of the twelve CCI indicators improved this month. Note that this contraction reading occurred only three months after the neutral reading (of 50) for May. Taken together, these recent CCI values reaffirm what I have been saying for a while now: Rhode Island’s economy has definitely slowed over the past several months. In fact, the set of 2011 CCI values up to this  point are trending lower, as we are have witnessed lower highs and lower lows. However, this does not indicate that Rhode Island has entered a recession. It is never advisable to make too much of a single month’s data. Were Rhode Island in recession, we would have observed six or more consecutive contraction readings. So, while I continue to believe that there is a 50 percent chance of a recession for Rhode Island this fiscal year, I do not believe we are in a recession at the present time. But the bizarre labor market data for August certainly make this pronouncement considerably more difficult.

Pardon the fact that I have not posted anything for a while, I switched from Cox Cable to FiOS (ready my post about issues I was having) and had to make all the required changes associated with this. Please note that my web site has now been moved to http://www.llardaro.com .

As sooooo many people here continue to summarize Rhode Island's overall economic performance by the recent behavior of its unemployment rate, the collective grasp of how well our state's economy is actually performing continues to slip farther and farther away from reality.

Recent gains in payroll employment here, which have at times appeared to defy gravity, seem to contradict any hint of weakness, reinforcing the declining unemployment reflects economic strength view. You might think that these large monthly employment gains have been a potential source of confusion to me, as my Current Conditions Index has continued to show a slowing pace of economic activity in Rhode Island. But as of 2011, I have been following Rhode Island's economy for twenty years. Suffice it to say that along the way I have observed and come to know all too many patterns and data combinations that reflect the idiosyncrasies of Rhode Island's economy.

But one doesn't need all this experience to know that it is always preferable to focus on a set of indicators, not any one single variable, to gain an accurate picture of Rhode Island's economic performance. That, of course, was the basis for my creating the Current Conditions Index. And even for a single indicator like payroll employment, there are often several related measures worthy of observation.

The chart below shows the recent behavior for both employment measures here (click to enlarge): 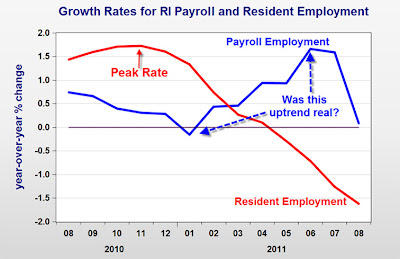 Note that the year-over-year rate of growth for resident employment peaked before the end of 2010 and has continued to decline, becoming ever-more negative, as 2011 progressed. For payroll employment there is a very different story: after moving to a positive rate of growth in the beginning of 2011, growth continued to accelerate through June. For July there was a modest slowing in growth, before plummeting to an almost 0% growth rate in August. So, was employment here really rising or falling recently?

RESULT #1: Regarding the recent behavior of payroll employment: POSITIVE MEASUREMENT ERROR COMETH BEFORE THE FALL.

The dramatic-appearing run up in payroll employment should therefore be viewed as spurious, overstating payroll strength. In August, think of payroll employment figure as a "burp," expelling the measurement error that had accumulated in prior months.

Next, let's link the recent declines in Rhode Island's unemployment rate to changes in employment -- but the employment measure that is in the same survey it is -- the household survey (click to enlarge): 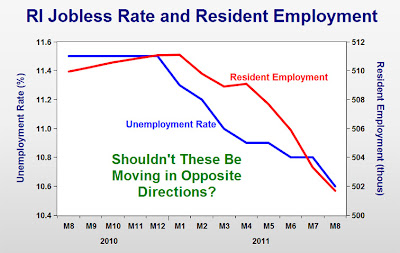 RESULT #2: THE UNEMPLOYMENT RATE CAN DECLINE EVEN WHEN RESIDENT EMPLOYMENT IS FALLING.

Obviously, there must be another force at work for this to occur, one that is obviously not intuitive. That force is the behavior of our state's labor force, as the next graph shows (click to enlarge): 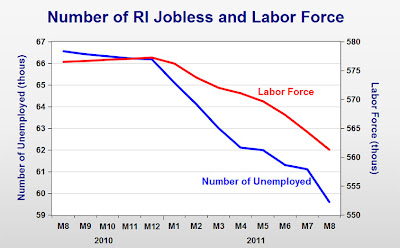 Rhode Island's labor force has been declining since early 2011, along with both resident employment and the number of unemployed. The fact that the number of unemployed has been declining, even though resident employment has also been falling, is what lies at the heart of the explanation of this strange seeming combination of changes.

The math of August's numbers can be obtained from the following table (data in thousands) (click to enlarge):

Let me conclude by moving from the math of these calculations and show that in spite of these percentage changes and the way the unemployment rate is calculated, the August data show that a substantial number of Rhode Island's unemployed dropped out of the labor force, presumably as they were unable to obtain suitable employment. Make no mistake, however, the simultaneous and relatively large drop in resident employment is every bit as troubling as this, as it is reasonable to conclude from this rather rare trend that thousands of self-employed Rhode Islanders also "threw in the towel" on their business enterprises. Either way, this indicates that Rhode Island has entered a period of slower economic growth, which is entirely consistent with the recent behavior of my Current Conditions Index.

RESULT #3: ALWAYS FOLLOW A SET OF ECONOMIC INDICATORS RATHER THAN A SINGLE ONE.