On Friday (3/18) I was on WPRO's Buddy Cianci Show. We discussed the employment/unemployment picture for Rhode Island, my Current Conditions Index, and the state's budget, especially proposed changes to the sales tax. Here is a link to that interview.
Posted by Leonard Lardaro at 10:33 PM 0 comments

Email ThisBlogThis!Share to TwitterShare to FacebookShare to Pinterest
Labels: WPRO

The January 2011 Current Conditions Index (the report is given in the prior post and on my website) received coverage in local media. Here is my discussion of the index on Channel 10's Business Talk with Frank Coletta. The Providence Business News, as always, gave very nice coverage to the report as well.
Posted by Leonard Lardaro at 3:10 PM 0 comments

Things are not always as they appear. That certainly pertains to the labor market data prior to the recent rebenchmarking. As I had indicated in the last few reports, I expected the new labor market data to show greater employment levels since historically, revisions are typically higher in the early stages of recoveries and the magnitudes of implied job losses seemed to be too extreme. Let me confess, the magnitudes of the job gains in the newly released data took me by surprise.

What we now see is that Current Conditions Index values for all of 2010 were substantially higher than what the existing data throughout last year had led us to believe. Furthermore, these data point quite clearly to a change in the date for the beginning of Rhode Island’s current recovery from June of 2010 to February.

The data prior to rebenchmarking produced CCI values no higher than 58 for all of last year, with two non-expansionary values in October and November. What we now see is that after February, as the recovery progressed, the CCI exceeded 58 for the remainder of last year, reaching a high of 83 (where 10 of the 12 CCI indicators improved) on three occasions. The primary reason for the higher CCI values concerns two indicators. The first of these, Employment Service Jobs, is a leading labor market indicator that includes “temps.” While we thought it had failed to improve throughout all of 2010, the revised data show that it improved for every month of 2010. The other changing indicator, Private Service-Producing Employment, had only risen a few times last year. The new data show this improving for 10 of the 12 months in 2010. The two of these accounted for most of the revised CCI increases.

So, in light of all the CCI changes, January was another good month for Rhode Island. Its value, 67, while exceeding anything we had witnessed in the prior data, actually showed a decline from the (new) December value of 83. Eight of the twelve CCI indicators improved, with yet another strong performance from our latest “star,” Employment Service Jobs, which rose 2.8 percent.

There were modest gains in the remaining indicators that improved. US Consumer Sentiment rose, but by only 0.2 percent. Private Service-Producing Employment increased by 0.4 percent, its tenth consecutive improvement. Manufacturing turned in a seemingly modest performance, but that is deceiving. Total Manufacturing Hours rose by 0.5 percent, but this was its eighth improvement in the last nine months, something I thought we would never see again. Couple this with a strong increase in the Manufacturing Wage (+4.1%), and Rhode Island manufacturing strength mirrors that of the US. Our Labor Force increased by 0.8 percent, and the revised data show that improvements in our Unemployment Rate were not largely the result of Labor Force declines as the prior data appeared to show. Our Unemployment Rate remained above 11 percent in January, though. Finally, New Claims fell sharply in January (-12.9%).

Retail Sales declined in January (-0.8%), as did Government Employment (-1.3%). Benefit Exhaustions rose (+16.5%), while Single Unit Permits, a very volatile indicator of late, plunged by over 50 percent.

THE BOTTOM LINE:
The revised labor market data and CCI values point to the fact that Rhode Island is actually in a fairly “typical” recovery in terms of cyclical momentum. Our state’s sluggish job growth and stubbornly high jobless rate point to the sad reality that major structural impediments continue to counteract our state’s cyclical momentum, so overall, growth remains unacceptably low. Removing structural impediments should be our job #1.
Posted by Leonard Lardaro at 3:01 PM 0 comments

An Interesting Difference with the US 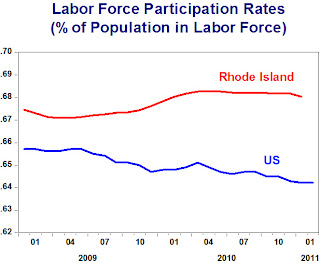 Nationally, there is both concern and more than a little bit of confusion concerning how this rate has been changing. It should be apparent from the graph that nationally, the labor force participation rate has continued to decline for some time now, falling to a level of around 64 percent (0.64) in February of this year. There was an excellent discussion of this on CNBC this morning, going into far more detail that I will engage in here.

At this point, the more interesting question in this state is why the participation rate for Rhode Island rose during 2009 while the US rate was declining and the reason why our state's participation rate has largely remained unchanged at very high values. While there are in reality a number of factors responsible for this, I'll give you a hint concerning why RI is so different: 99. See if you can figure out this "puzzle."
Posted by Leonard Lardaro at 10:02 AM 0 comments

I was invited to speak at the Winter Meeting of the RI Statewide Coalition which was held last Saturday. If you would like to see my presentation, here is the link for part 1. The remainder of the talk (part 2) is on this link.

In future posts, I will lay out  some possible name and motto changes for our state and link back to articles I published in the ProJo that are related to the things I spoke of in the RISC talk.
Posted by Leonard Lardaro at 12:01 PM 0 comments