Below is an abbreviated version of the February 2013 Current Conditions Index report. The full report (in PDF format) along with tables and historical reports is available on my web site:   http://www.llardaro.com


This isn’t the first time I can recall seeing less impressive performance than what we had apparently missed after upwardly revised data were released. What a tease!


I wish I could say that this month’s indicator performance was in some way misleading, that there is reason to believe that Rhode Island’s economy isn’t slowing, but the data show rather convincingly that Rhode Island’s economy has in fact slowed during the first two months of 2013. Perhaps even worse, two critical indicators that have been strong performers for some time now may be in the process of reversing their trends.


The first of these is Retail Sales. Its performance has been stellar, as its year-over-year growth rates have exceeded 3 percent, reaching over 6 percent several times since October. It is quite possible that the combination of the lapse of the Payroll Tax Holiday and high gasoline prices will produce retail weakness throughout the first half of 2013. The other indicator is New Claims for Unemployment Insurance. This is a leading indicator that reflects layoffs. On a year-over year basis it has improved for some time now. It has, however, begun to weaken on a monthly basis, which could eventually translate into weakness year-over-year.


Along with both of these, several of the indicators that were supposedly declining but actually improved last year have begun to slow as well. Growth in our state's Labor Force has moderated since December, as has Employment Service Jobs, a leading labor market indicator. The same is true for Private Service-Producing Employment, which saw its growth fall below 1 percent for the first time since December. To be fair, there was a “strange” behavior for payroll employment in February, as it fell from January’s level, which is very likely responsible for the slowing rates of growth for both Employment Service Jobs and Private Service-Producing Employment. Let’s hope this doesn’t signal that the employment data is getting “strange” again this year!
---------------------------------
See the full report (with tables) at: http://www.llardaro.com .
Posted by Leonard Lardaro at 11:00 AM 0 comments

New York City had a great mayor who recently passed away, Ed Koch. He became famous not only for his excellence as mayor, but for his saying: "So, how am I doing?" Now that Rhode Island's jobless rate has at long last fallen below double digits, this is a very good time to pose that question for Rhode Island's economy.

It's particularly important to address this question for a number of reasons. Most importantly, in a well-run state, the leaders of that state continually assess both the strengths and weaknesses of their state's economy and work hard to make their economy more competitive. Clearly, they understand, to quote the old saying, that success is a journey, not a destination. But I digress. I want to talk about Rhode Island, which is hardly a well-run state and whose elected officials have yet to earn the designation "leaders."

One of the major factors that I believe has held Rhode Island back is the mindset and psychology of its elected officials. In Rhode Island, our elected officials seem to always do things the same way: they tend to restrict their focus exclusively to Rhode Island and its performance only at the present time. A number of years back, I attempted to develop a nomenclature for the psychology of Rhode Island's elected officials. In a 2008 article I wrote for The Providence Journal, I described this behavior, which characterizes that mindset all too accurately, as PAROPIC. What does this word mean? It is a combination of "parochial" and "myopic." Welcome to our world!

This focus by Rhode Island's elected officials has proven to be disastrous in terms of our ability to move our state's economy forward. Consider, for example, that in the past several months Rhode Island's unemployment rate finally fell below 10%. To our states leaders, this was an end in itself, since our "metrics" were moving in the right direction. Apparently, our elected officials interpreted this as indicating that everything was beginning to move in the right direction, and as far as I can tell, they viewed this as reflecting the beginning of "the turnaround" of Rhode Island's economy that will set all right here. For them, success is obviously a destination.

This was a textbook example of paropic behavior! Why? Because while Rhode Island's unemployment rate was declining, so too were the rates in almost every other state. Ironically, when these declines occurred, Rhode Island moved into a first-place tie for the highest unemployment rate in the United States (tied with California in January). The only way this reality ever made it into the consciousness of our state's elected officials was as the result of media stories that almost always take comparative national performance into account.

The real question here is why Rhode Island's rate jobless has remained among the highest in the country, even though it has been declining of late. Furthermore, it's important to keep in mind that the unemployment rate is a lagging economic indicator. We need to go behind the scenes for this number to understand what is really going on.

Fortunately, that's not very difficult to do. If you want to understand why Rhode Island's unemployment rate became so high and has remained elevated for so long, you need to go no farther than an examination of the recent behavior of payroll employment. But such analysis should not be paropic. An informed analysis will look at the temporal performance of Rhode Island's payroll employment relative to that of neighboring states, our region, and the entire US.

The chart below (click to enlarge) shows payroll employment for Rhode Island, Connecticut, Massachusetts, New England as a whole, and the US since 2005. 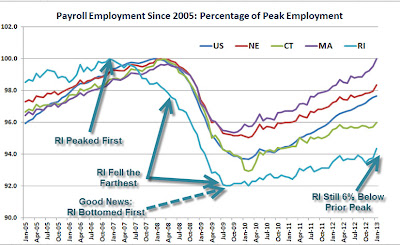 What should be apparent from the outset is that Rhode Island has clearly distinguished itself.  Not in terms of stellar performance, but by how it has underperformed all of the entities to which it is being compared over this period. What are the distinguishing features, or "stylized facts"  of Rhode Island's comparative payroll employment performance since 2005?
If you want to see our comparative unemployment rate performance, you could gather all of the required data and replicate the chart above. A far simpler way, however, is to simply print out the above chart, flip the page, then turn it upside down. If you do this, you will likely be amazed at how good of a job it does in allowing you to visualize Rhode Island's joblessness in a non-paropic manner -- in relative terms through time.

Posted by Leonard Lardaro at 11:33 AM 0 comments