Below is an abbreviated version of the November Current Conditions Index report. The full report (in PDF format) along with tables and historical reports is available on my web site: http://www.llardaro.com .

As we moved further into the fourth quarter, the Rhode Island economy posted yet another strong performance. In November, Rhode Island’s economy sustained the jump in momentum we witnessed last month, which was itself the best we had seen here for quite a while. Using the flawed “official” labor market data, the Current Conditions Index registered a score of 75 for November, as nine of the twelve CCI indicators improved. And, a number of those improving indicators registered strong changes. Looking beyond the labor data inaccuracies, the more correct score for November is 83. Rhode Island’s recovery was 33 months old as of November.

This back-to-back strength provides a critical piece of evidence supporting the hypothesis that October’s strong performance was not a “one month wonder.” What we appear to be witnessing is a trend of more broadly based economic activity that has generated increased economic momentum. It thus appears that Rhode Island’s economy has now shifted into a higher gear.

This seems to suggest that the trend of uneven economic activity, the bounces in monthly CCI values we had been witnessing over the past several months, has now ended. However, just as it is not wise to place too much emphasis on the results of a single month, while two months tends to be more convincing, even more data is needed before it will be safe to arrive at this conclusion. In spite of this, it is now an appropriate time to address a meaningful distinction in terms of the assessment of economic activity: levels versus rates of growth.

The Current Conditions Index is a momentum indicator. Its values reflect how broadly based economic activity is (i.e., the greater the number of improving indicators, the more broadly based is economic activity) and the resulting underlying momentum. It does not, however, dwell upon the levels of the various indicators or the overall economy. So, at present, assuming the fourth quarter results hold, we are witnessing a broadening of economic activity here that has produced greater momentum. This reflects the rates of change of the CCI indicators and our state’s economy.  It says nothing about current levels. This is where things get a bit discouraging: while Rhode Island’s economy is improving, the levels of key variables like payroll employment remain far below the values they attained at the height of the last recovery (our employment peak occurred in December of 2006). We still remain about six percent below our employment peak. The recent CCI performance indicates that we are moving toward our prior peak at a more rapid rate. Obviously, the greater is sustained momentum, the shorter is the time before we reach a prior peak.
For November, (at least) nine of the twelve CCI indicators improved. Importantly, November saw only the second increase in our state’s Labor Force since the end of 2010! Four of the five non-survey-based indicators, those that don’t suffer from the flaws currently plaguing the “official” labor market data, showed substantial improvement versus one year ago. Retail Sales sustained its recent strength, registering a strong 6 percent growth rate versus last November, its eleventh increase in the past thirteen months. Along with this, US Consumer Sentiment once again surged by just under 30 percent, helped by improvement in the national economy. Benefit Exhaustions, reflective of longer-term unemployment, also fell at a double-digit rate (-12.3%), sustaining its downward (improvement) trend. New home construction, based on Single-Unit Permits, rose by 3 percent, providing further evidence that it reached a bottom several months ago. In spite of this, its levels remain subdued, partly the result of our state’s declining population. The sole disappointment was for layoffs, in terms of New Claims for Unemployment Insurance, which rose by 1.6 percent.

Yesterday I gave a presentation to SBANE in Warwick. Following the presentation I was asked to make two of the images I used available to other persons, which is the purpose of this post. While these images are satirical, unfortunately for Rhode Island, they embody more than a modicum of truth in characterizing Rhode Island's approach to economic matters. Click on these to enlarge them.

#1: The "State of the Art" for Long-Term Planning in Rhode Island 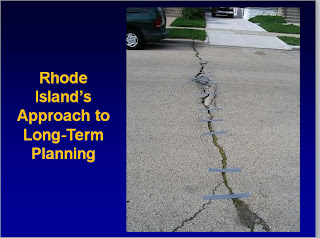 #2: Rhode Island's Culture of Redundancy permeates all levels of government. This has generated huge fixed costs for RI government to manage. Ultimately the result has been for fix costs to play far too large a role in decision making here (partial explanation for image #1 above) These highlight important contributors to what I have referred to for years now as Rhode Island's ENDOGENOUS MEDIOCRITY. Here's the link to a ProJo article I wrote about this back in 2009.


Posted by Leonard Lardaro at 9:49 AM 0 comments