Below is an abbreviated version of the June Current Conditions Index report. The full report (in PDF format) along with tables and historical reports is available on my web site: http://www.llardaro.com .
..............

Rhode Island ended the second quarter on a rather mixed note. While the “official” labor market data continue to depict an economy that is not only falling off the proverbial “cliff,” but that has entered into a double-dip recession, a news release from the Governor’s office, based on analysis from the Department of Labor and Training, stated that employment here is not actually falling, as the DLT monthly data continue to show, but has actually been increasing for some time now (the release covered the first quarter of 2012). Apparently, this came as a big surprise to much of this state’s media, even though the errors with the “official” labor market data were publicly acknowledged by the DLT months ago and I have been discussing all of this regularly in my Current Conditions Index reports. Recall, this data divergence caused me to begin providing two CCI values each month — one based on the “official” data and the other using my simulated labor market values.

What do we actually know overall about Rhode Island’s current economic performance? Rhode Island’s economy continues to be in a tepid recovery that began in February of 2010, now 28 months old. While economic reality here is far better than what the “official” data show, the non-flawed data indicate that this recovery displayed some loss of momentum during the second quarter that will likely continue moving forward. It is important to note, however, that even using the flawed “official” labor market data, the Current Conditions Index never gave a recession signal. Furthermore, based on my simulations (the other CCI values listed), Rhode Island’s economy has been able to sustain some of the momentum it gained during the second half of 2011, although this that momentum bas begun to erode based on the performances of several key individual indicators.

According to my econometric models, there were three noteworthy but problematic indicator changes in June. First, payroll employment, which has been rising for some time now on a yearly basis (albeit at declining rates) actually declined. Second, this employment weakness translated into an uptick in Rhode Island’s monthly Unemployment Rate from my projection of a 10.7 percent rate in May to 10.8 percent in June. Finally, the rate of growth in a very important labor market indicator, Private Service-Producing Employment, has slowed dramatically over the past two months, barely increasing in June.

For several months now, I've been pretty much alone noting how payroll employment in Rhode Island would be revised substantially higher, both in my Current Conditions Index reports and prior Blog entries. Over this period, I have continually stated how employment here is behaving very differently than what the official data were showing. The basis for this dates back to a number of months ago when the Rhode Island Department of Labor and Training (DLT) stated at the most recent Revenue Estimating Conference that employment as of the end of 2011 had not been declining, but actually rising. Based on this, I dusted off my econometric models and began generating projections of what I believe payroll employment would ultimately be revised to.

This was a very lonely endeavor, as I appear to have been the only person in this state noting that the official data were incorrect and far too pessimistic. So, while everyone continued to say that Rhode Island was on the verge of a recession, something I too had said until I learned of the possible revisions, I tried in vein to note that this was very far off the mark. And, even if we were to eventually fall to a double-dip recession, presumably based on global weakness or national weakness, at least we would have some margin for error.

Today, the DLT and Governor Chafee released a report confirming substantial future upward revisions to our state's payroll employment data. According to this press release:


This is consistent with what my econometric models had been showing. Ironically, my estimates were a bit too low, as they showed a clear uptrend since October of last year, but to a level below the apparent upward revision. The chart below (click to enlarge) shows the "official" data and my estimates. 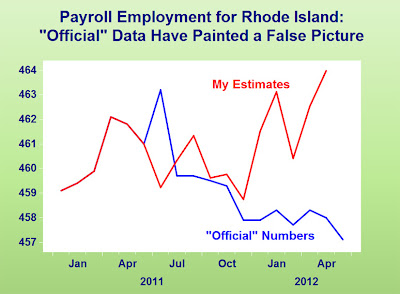 Based on this, let me reiterate a few points I have been making over the past several months:


So, at this point, let me take the leaders of our state and its media to task for being far too pessimistic about the state of Rhode Island's economy. Think about that for a moment: me, Leonard Lardaro, accusing our leaders and the state's media for being too negative! Ain't that a bitch!!

Let me conclude by stating something that this points to, which I have been saying for far longer than I can remember: Accuracy is far more important than tone!

Posted by Leonard Lardaro at 11:49 AM 0 comments