This is an abbreviated version of the full Current Conditions Index report for May. The complete version, which includes the indicator performance table and the report in PDF format, can be found on my web site: http://www.llardaro.com .

Rhode Island’s economic outlook in May is similar to that from April: the current tepid recovery is continuing, although signs of a loss of momentum have become more readily apparent. The good news is that Rhode Island is still in the recovery that began in February of 2010, which as of May reached its 27th month. The concerning news is that like the US, our rate of improvement has slowed.

In discussing this, I am not referring to the questionable “official” labor market data currently being released by the DLT. According to those figures, payroll employment here has now either declined or remained unchanged on a year-over-year basis for ten consecutive months. I challenge anyone who chooses to believe those numbers to reach any conclusion other than that Rhode Island has already entered a double-dip recession. In fact, even the DLT has admitted publicly that a number of those published year-over-year employment declines never occurred — they will be eliminated when the data are revised in coming months.

Fortunately, if we focus on more accurate data and the Current Conditions Index, which is a broadly based index, it is clear that some of the momentum we witnessed as 2011 ended and we moved into 2012 has begun to fade. While the pace of economic activity here isn’t all that great, my econometric models show that payroll employment has slowed to an annual growth rate of around 0.3 percent. The Current Conditions Index for May, based on the “official” data, shows a reading of 58, once again in the expansion range. The other displayed value, 67, is the likely value when the “official” data are eventually revised. Based on those alternate values, the CCI has now moved from values around 75 down to 67. As I have noted for several months now, it is the persistence of these expansion range CCI values that matters the most for now.

On a year-over-year basis, four of the five non-survey-based CCI indicators improved. Only three of the five showed improvement on a monthly basis, though. Retail Sales surged by 9.9 percent compared to last May, its ninth consecutive improvement. To some extent this is weather related. The skilled Rhode Islanders we rent out to neighboring states who bring their income home with them also directly impacts this indicator. Overall, such substantial Retail Sales momentum argues against making any recession call.  ......

The remainder of this report and the complete version, which includes the indicator performance table and the report in PDF format, can be found on my web site: http://www.llardaro.com .


Posted by Leonard Lardaro at 9:52 AM 0 comments

Is Government Employment in RI falling?

Over the last six years, total government employment in Rhode Island appears to have fallen a great deal -- probably more than most of us might have thought possible at one time. Obviously, all of the budget cutting that has occurred since 2006 has played a role in this. One might also think that the recession itself would also have had a large negative impact. However, the stimulus plans from the past few years actually helped Rhode Island and many other states avoid state employee layoffs, although this type of help appears to have now ended. 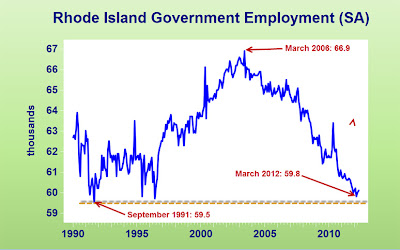 Total government employment peaked here in March of 2006 at 66,900. Over the next six years, through March of 2012, it declined to "only" 59,800, which was a 10.6 percent drop. Do we conclude from this that our state's public sector has truly contracted more than it should have and that no further declines should occur? Hardly. The chart above looks at government employment in absolute terms, independent of anything else. For those of you who have read many of my posts, this is not the correct way to approach this -- a relative view is more appropriate.

Our relative view is accomplished by looking at government employment relative to overall (payroll) employment. This is shown in the next chart (click to enlarge) that covers the same time period as the original chart. 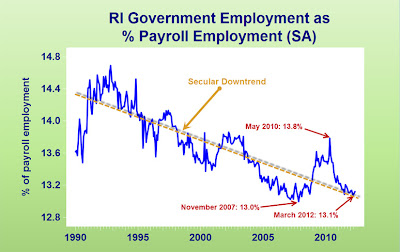 To help better comprehend what underlies these charts, the next chart disaggregates the information contained in the second chart, looking at the shares of each of the three components of total government employment (click to enlarge). 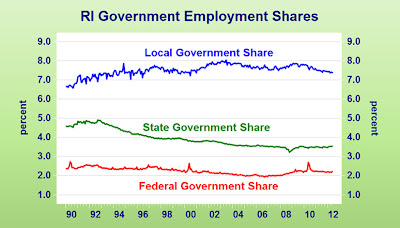 Overall, as of May 2012, local education employment, the largest sub-component of total government employment in Rhode Island, was 22,800, or 2.8 percent of service-producing employment. While we might not be able to reduce that number very much through educational reform and other changes, the cost of financing K-12 education in this state is very high -- among the highest in the country on a per-pupil basis. Sadly, the "output" resulting from this very high expenditure is less than satisfactory. This points to relatively low productivity, if one were to relate attainment to expenditure. However, this is a very complicated issue. Suffice it to say for now that managing government here, as should be obvious from the situation for local educational employment and expenditure, is far more of a quality issue than one of just quantity.