Rhode Island Employment by Sector at the end of 2010

The table below (click to enlarge) shows employment by sector as of December, 2010 for Rhode Island. I have sorted these from largest to smallest sector. Their values for November of 2010 and December of 2009 are also included. Some persons combine "Accommodation & Food Services" and "Arts, Entertainment & Recreation" into a single category. That combined category would have a rank of #5 as of December, 2010.

From the "top 6," two things should be apparent. First, RI is led by sectors that don't exactly grow at explosive rates during recoveries. Second, in the "top 6" there are several groups that are very cyclically sensitive -- mainly Retail Trade and Manufacturing. While neither of these generated terribly large job gains during the run-up to "The Great Recession," both were able to generate significant declines when things here began to weaken.

How much did employment in each of these sectors change from December of 2009? The next table (click to enlarge) shows this, ranking by the size of the employment change.

Any wonder why RI's economic performance during the present recovery that began in June of 2010 hasn't exactly been stellar?

Let me end on a potentially positive note. I believe very strongly that when the RI DLT releases the revised labor market data for the past two years (in late February), the values in the above tables will be revised higher. How much higher, I can't say at the present time. And, I don't expect the rankings by sector size to change. I truly hope (and expect) that there will be more positive change sectors, whose changes that will not be as anemic as what the available data show today.
Posted by Leonard Lardaro at 6:11 PM 0 comments

The November Current Conditions Index (the report is given in the prior post and on my website) received coverage in local media. Here is my discussion of the index on Channel 10's Business Talk with Frank Coletta. The Providence Business News, as always, gave very nice coverage to the report as well.
Posted by Leonard Lardaro at 10:54 AM 0 comments

After sputtering last month, Rhode Island’s recovery appears to be sustaining itself, although not by very much. In October, the Current Conditions Index fell to 42, a contraction value, as only five of the twelve CCI indicators improved. For November, while there wasn’t great news, there was reassuring news, nonetheless. The November CCI rose to 50, its neutral value, as six of twelve indicators improved. As November is a month where substantial labor market data revisions often occur with data rebenchmarking (we will see this in February), perhaps the last few months of CCI values will be revised higher with the new data. We will have to wait and see. But for November, at least, several CCI indicators had very easy “comps” a year ago, so the index’s rise from October to November might not indicate that we are “out of the woods” yet, in terms of sustaining this recovery.

Retail Sales, one of the foundations upon which Rhode Island’s recovery has been built, improved again in November. It has now increased for nine of the past ten months, reflecting a strong uptrend. Another part of our foundation,Consumer Sentiment, rose after two consecutive decreases. For November, US Consumer Sentiment rose by 6.8 percent. It too remains in an uptrend, having risen for all but one month over the last year. For November, we again witnessed strength in our state’s manufacturing sector. Total Manufacturing Hours rose by 1.1 percent, powered by yet another sharp increase in the length of the workweek. November was the fifth consecutive improvement in this indicator, an anomaly for Rhode Island. Along with this, the Manufacturing Wage rose again, by 3.7 percent.

Two other indicators improved in November. Benefit Exhaustions, which reflects long-term unemployment, fell sharply, dropping by 24.8 percent, its ninth consecutive improvement. Finally, our state’s Unemployment Rate declined again, from 12.5 percent last November to “only” 11.6 percent this November, partly the result of declines in our Labor Force, which fell by 0.1 percent compared to a year ago. Over the month, our Unemployment Rate rose (by 0.2), related in part to a monthly increase in the Labor Force.

The remaining indicators failed to improve. Single-Unit Permits, which reflects new home construction, fell sharply again in November, by 45.7 percent, to an annualized level of only 610 units. New Claims, a leading indicator that measures layoffs, rose at a double-digit rate (by 15.7 percent). It is not clear whether this indicator has begun a prolonged period of increase (non-improvement). Let’s hope it hasn’t. Employment Service Jobs, another leading labor market indicator, fell by 12.5 percent compared to a year ago. Its value has fallen below its recent plateau, another disturbing development. Private Service-Producing Employment fell again (-0.5%). Its rate of decline continues to moderate. Finally, Government Employment declined by 0.2 percent in November, fueled largely by a decrease in local non-education employment. The absence of any future assistance from the federal government should cause its future deterioration.
THE BOTTOM LINE:

Rhode Island's economic recovery remains slow and somewhat tenuous based on existing data. Soon we will see the revisions to the existing labor market data. Hopefully, these will indicate less depressing employment picture. They might even produce some upward CCI revisions. The good news, though, is that things really can't be worse here than they have been. Maybe this recovery isn't as tenuous as existing data seem to indicate.
Posted by Leonard Lardaro at 6:10 PM 0 comments

A Look Back: The Current Conditions Index Since 2006

Sometimes a picture is worth a thousand words, or so the saying goes. The last several years have been very bleak for Rhode Island. Our state weakened then fell into recession well before most other states. At this point, Rhode Island is still in a recovery, or at least I think so, but I will continue to keep my fingers crossed anyway. The Current Conditions Index (CCI) report that will be released next week (and posted here and on my web site) will show exactly what I am referring to.

So, now for the picture. Below is a chart of the CCI since 2006 (click to enlarge). I don't think words do this justice, but I will allow you to judge for yourself. 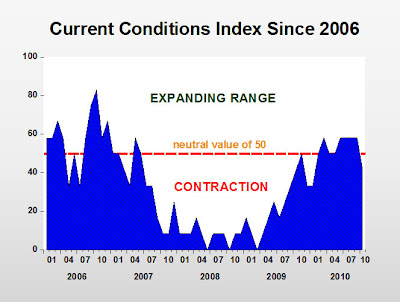 The November data for Rhode Island were somewhat disappointing. The only potential bright spot is that at this time of the year, labor market data have often been far from the actual values, something that ends up being corrected when the data that are later revised (in February with the release of the rebenchmarked labor market data from 2009 forward).

Below is a table of November's actual data (click to enlarge).