Below is an abbreviated version of the January 2013 Current Conditions Index report. The full report (in PDF format) along with tables and historical reports is available on my web site:   http://www.llardaro.com

------------------------------------------------
The long-awaited revisions to Rhode Island’s labor market data have finally arrived. While I have been anticipating these for quite some time now, it appears that most people in the state remained unaware of what was actually happening until very recently. According to the previous “official” data, Rhode Island was doing very badly. At one point, it wasn't all that difficult to conclude that we had actually entered into a double-dip recession. Throughout all of this, I kept chugging along each month with reports indicating that contrary to the “official” data, our state’s economy was performing fairly well in terms of its overall momentum and the breadth of activity here.
The new data confirm my prior analysis. Not only has Rhode Island's economy been improving for some time now, the pace of activity here actually accelerated during the third and fourth quarters of 2012. A quick examination of the chart for the Current Conditions Index (below, right) shows this very clearly. The good news for me is that I can now stop providing two CCI numbers each month. As of January, Rhode Island’s recovery was 35 months old.
According to CCI revisions for 2012, values revised higher for ten of the months, one was unchanged, and December was revised down slightly. What a difference! For all of 2012, the CCI registered values of 83 or greater five times, with two of those equal to 92.
So, after strong third and fourth quarters in 2012, Rhode Island began 2013 on yet another positive note as the Current Conditions Index registered a value of 75, with nine of 12 indicators improving. Among the indicators that improved were several very strong, favorable trends. Not the least of these pertains to Retail Sales. Its year-over-year growth has matched or exceeded six percent for three of the past four months. Along with this, our state's Labor Force appears to have finally begun to rise again, starting in last August. That upward trend makes the improvements in our state's Unemployment Rate more significant. Two changes I had anticipated were confirmed. Private Service-Producing Employment has actually been rising for quite a while, as was true for Employment Service Jobs. Finally, the revised CCI values show that Rhode Island was not stuck in a saw tooth pattern through the middle of 2012. Instead, there was consistent momentum throughout all of last year with an acceleration during the second half of the year during which it is safe to conclude that Rhode Island’s economy shifted into a higher gear.
Three indicators failed to improve in January. Government Employment, which reflects the effects of ongoing fiscal consolidation, hasn’t improved since August of 2010. It might be in the process of bottoming, assuming that our recent momentum is sustained, as it has fluctuated around 60,000 for several months now. US Consumer Sentiment also failed to improve, but January’s decline was its first in almost a year. Recent stock market momentum bodes well for this indicator. Lastly, Single-Unit Permits fell in January, but its “comp” from a year ago was almost impossible to beat due to the weather last January. The apparent bottoming of housing here should help prevent this indicator from moving into a downtrend in the coming months.
-----------------------------
See the full report (with tables) at: http://www.llardaro.com .
Posted by Leonard Lardaro at 10:34 AM 0 comments

﻿
For the better part of a year, I have been addressing the problems with Rhode Island's "official" labor market data. On several occasions in years past, we have had situations where a divergence between the direction of changes in actual and official data emerged. Historically, though, these never occurred until October. Within a couple of months, we would get the rebenchmarked data and we'd be back to the correct labor market trends.
In this most recent episode, we were treated to something I had never seen in over two decades of analyzing Rhode Island's economy: a divergence between actual and "official" data that started in the first half of the year. Before I became aware of this, I had detailed how horrible the official data were in a series of blog posts. If those data were to be believed, then Rhode Island would indeed have entered into a double-dip recession.
The picture painted by that data was so incredibly negative, I became suspicious that things could be that bad -- even for Rhode Island! The primary basis for my suspicions was the apparent strength in a number of key economic indicators such as retail sales. While it was possible to explain some of the apparent divergences between retail sales and labor market weakness based the fact that Rhode Island rents out substantial numbers of its skilled residents to our neighboring states, I continued to sense that something still wasn't right. Then, one day, I received an email from the Department of Labor and Training stating that when these data are revised, they will show that payroll employment has been actually been rising, not falling, for some time now, a total contradiction of the "official" data.
In light of this rather strange situation, I went back and dusted off my econometric models for Rhode Island's labor market and updated them using only non-survey based data. Using those models, I then ran simulations attempting to gauge for myself what was actually happening, in spite of what the "official" data continued to say. Using the results of those simulations, I began to provide two monthly numbers for my Current Conditions Index: one was based on the "official" flawed data; the other was consistent with my simulated values. From that time forward, I presented what I was able to ascertain about the actual conditions in Rhode Island through this Blog and my monthly CCI reports.
I think of this time as my "Maytag Repairman" period (if you recall those commercials), as I was all alone in this endeavor, since all that was known and reported by our state's media was the flawed "official" monthly data. That, of course, created a real problem here since the data everyone was basing decisions on substantially understated Rhode Island's actual economic performance. Ironically, that made me the most positive and upbeat person when it came to assessing Rhode Island's economic performance. Accuracy cuts both ways!!!
Last week, the revised data were at long last made public. What they showed was what I had anticipated and written about since around March 2012, that things here were actually better that we had been led to believe. Ironically, using the newly corrected data, the revised Current Conditions Index values were very close to the corrected values I had stated using my econometric simulations.  In this post, I want to present three charts that highlight what was going on throughout that entire time period.
The first of these charts contrasts the originally presented data with the revised data going back to 2010 (click to enlarge). As should be apparent from this chart, there is a very substantial difference in the two sets of data that began around August of 2011. Perhaps most importantly, Rhode Island never flirted with the double-dip recession. Very much to the contrary, employment has shown a fairly healthy increase over the past two years, healthy for Rhode Island at least. 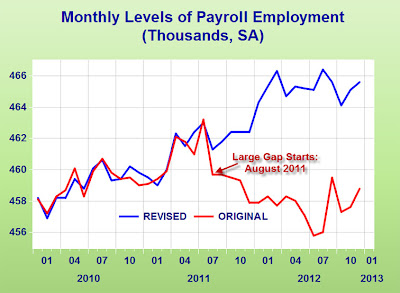 ﻿The next chart (click to enlarge) shows the same data as the above chart but includes the actual trend for the correct data. I will leave it to you to figure out the trend for the inaccurate original data. 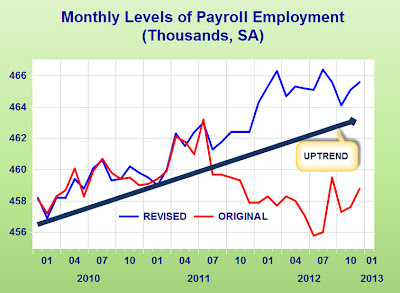 The final chart (click to enlarge) shows changes in payroll employment for each month over the past two years. These are year-over-year changes, which means each month compares its value to the value one year ago (ex: December of 2012 with December of 2011, etc.). 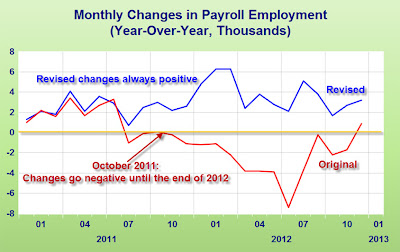 The most striking feature of this chart is how year-over-year changes became negative starting all the way back in October of 2011, which led to the conclusion by some that Rhode Island may well have entered into a double-dip recession. That is the faulty data I found it necessary to improve the accuracy of through my simulations, ultimately reporting them in my monthly CCI reports. By contrast, the revised data show that year-over-year changes were never negative over this entire period: employment each month continued to exceed its year-earlier value.
﻿
Where does this leave us? Rhode Island is doing considerably better than we were led to believe based on the flawed "official" labor market data (based on the old benchmark). We have never flirted with a double-dip recession since the end of the last recession almost three years ago. But while Rhode Island's economy was improving, so too were the economies of almost every other state. So, six years from our prior payroll employment peak (December of 2006), Rhode Island employment remains about six percent below where it once was. Ironically, while our unemployment rate has declined, it is now below 10 percent, we continue to have either the highest or one of the highest jobless rates in the country.
How are these changes in payroll employment linked to our state's unemployment rate and its national ranking? What this post has shown is that Rhode Island's level of employment has continued to rise and never fall, as the original data showed. What matters in addition to this is how rapidly our employment is rising. Sadly, that's where Rhode Island comes up short. Rhode Island failed to reinvent itself and make itself more competitive throughout The Great Recession and afterwards.
Sadly, our elected officials appear to believe that because they have now decided that they actually want to do something about this, we should be able to quickly and easily remedy our state's deficiencies. Apparently they intend to go to Staples and purchase an "Easy" button. Sadly, things are never that easy. It will take a great deal of hard work and consistent effort guided by due diligence before things here begin to change in any significant way. Sadly, that's very different than their current standard operating procedure, D + M: Denial + Manana. If the day ever comes when our elected officials actually begin to lead, all of us will be happily surprised by how much our state's economy will be able to improve.
Posted by Leonard Lardaro at 6:03 PM 0 comments