On Rhode Island's Proficiency with Math

This is a very short Letter to the Editor I submitted to the ProJo today. I don't know if it will end up being published, so I wanted to include it in my Blog.
I want to help correct an error that keeps occurring in the discussion of raising various tax rates that has been driving me crazy. Just about everyone in this state seems to be confusing percentage point changes with percent changes. These are not the same thing.
For example, the proposed increase in the sales tax rate on meals from 8 to 10 percent is two percentage points, not two percent. Think of it this way: for percent changes, you multiply the original number by something (here .02). For percentage point changes, you are either adding or subtracting values from an overall total (here adding 2.0). If I haven't already confused you too much, going from 8% to 10% is actually a 25% increase (=2/8).
I’ll leave it to you to do the math for the proposed increase in the maximum income tax rate from 5.99 to 9.99 percent (hint: it’s not even close to 4 percent, as was reported).
Posted by Leonard Lardaro at 12:34 PM 0 comments

This is an abbreviated version of the December Current Conditions Index report for December. The complete report (which includes the data table), along with reports dating back a number of years, can be found on my website: http://www.llardaro.com .


The year 2011 ended on a bit of a sour note. While Rhode Island’s economy started off the year fairly well, as the Current Conditions Index registered very positive readings through April, in the months that followed Rhode Island’s economy began to slip towards stall speed until November. November’s CCI reading of 67 held out the prospect that we might at last be breaking out of the neutral range we had been stuck in as the year ended, and as we moved into next year. But December’s CCI reading put an end to that speculation, at least for now.

For December, the CCI returned to 58, still an expansion value, as seven of the twelve indicators improved. The good news is that Rhode Island’s recovery is now 22 months old. The bad news is that the CCI has now failed to exceed its year-earlier value for ten consecutive months. So, the perpetual churning that occurs in any economy, with positive and negative forces interacting, continues here. The positives appear to continue holding the upper hand, as the CCI remains above its neutral value of 50. But the ultimate question is how strong that hand is. While it is still too early to make a definitive call about any possible breakout in the coming months, potentially there is a hidden positive — very soon the revised labor market data for 2011 will be released. I have come to believe that these data revisions will show that Rhode Island’s economy has actually been performing than we now think. But confirmation is still needed to validate my suspicion.

Therefore, the most logical place to begin analyzing this month’s results is with the five non-survey based indicators. Overall, their December performance was positive. The most noteworthy of these, improved yet again (+4.1%) capping a surprisingly strong holiday shopping season. Importantly, the recent strength in Retail Sales occurred in spite of declines in US Consumer Sentiment (-6.5%). Better yet, on a monthly basis, US Consumer Sentiment has now improved for four consecutive months and it appears to be gaining momentum along with more favorable national economic statistics and a rising stock market. New Claims, a leading labor market indicator that reflects layoffs, fell by 17 percent in December, following five months where it failed to improve. Benefit Exhaustions, one measure of long-term unemployment here, fell again, by 17.8 percent. This indicator has been in a downtrend since March of 2010, one month into the present recovery. Finally, Single-Unit Permits, which reflects new home construction, perhaps the most volatile of the CCI indicators, declined by 20.3 percent in December.

The remaining seven CCI indicators are all survey-based, so I expect many of their values to be revised soon. Keep in mind that only their yearly changes matter for CCI values. Our Labor Force continued to perform very badly in December, falling by another 2.3 percent. On a monthly basis it did improve, which makes the November — December rise in our Unemployment Rate less of a negative. Total Manufacturing Hours, a mainstay of this recovery, jumped sharply (2.5%), as the workweek rose again. The Manufacturing Wage surged again by over 17 percent in December, for those who believe in economic miracles. Employment Service Jobs, a leading labor market indicator that includes “temps,” fell by 1.1 percent, but this should not come as much of a surprise given its very difficult “comp” from last year. Based on the existing data, this indicator appears to have bottomed. Finally, Private Service-Producing Employment continued to grow, albeit slowly (+0.4%), while Government Employment fell once again in December, by 2.3%.

THE BOTTOM LINE:
I always view December as “the dark side of the moon” when it comes to economic data here, since, like the astronauts, we too are almost entirely out of touch with what is actually occurring at that time. I expect positive revisions to a number of labor market indicators, but it is not clear what the magnitudes of those changes will be. I truly hope the picture that emerges is materially better than what we have come to believe, since substantial downward revisions would reflect a path far more difficult for us to manage. 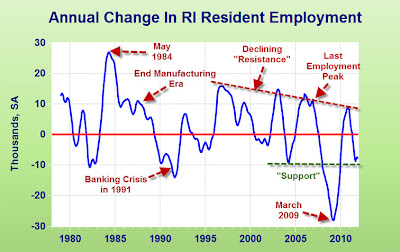 I have made a number of annotations in this chart. The first relates to the largest rise in resident employment over this entire time span, which occurred in May of 1984. Some of you will recall that 1984 was the last year that manufacturing employment actually rose in Rhode Island, which is reflected in that large spike.
Things went downhill after that, as Rhode Island's manufacturing era ended in late 1987, and we eventually reached our largest decline up to that point as the banking crisis unfolded in 1991 (we were also in a recession at that time). We finally began to regain our footing by 1995, as declines in resident employment finally ended and it moved to its highest increase since the end of the manufacturing era.
One of the most striking features of how resident employment has behaved since 1995 has to be that  our peak increases have continued to diminish through time. The dashed red line shows this as a line of "resistance" -- lower highs through time. As for declines, had it not been for "The Great Recession," our lows would have remained somewhat contained, at decreases of around 10,000 (some containment!!). I have labelled this as a "support" line. Ironically, Rhode Island's last trough occurred in March of 2009, just as the stock market was bottoming!
According to these data, our most recent peak increase, which occurred in 2010, was also below the level we observed when payroll employment (the other measure) reached its peak all the way back in December of 2006. At the present time, the available data show that resident employment continues to decline relative to year-earlier levels by alarmingly large amounts, around 7,000.
As bad as that sounds, there is very likely to be reason for hope in this. That is also the case for the data I didn't discuss here, payroll employment. Historically, when data are revised higher in a given year, as Rhode Island saw last year, revisions the following year result in worse numbers. So, history is against us. From my reading of the set of all the economic numbers for Rhode Island that I follow, I expect the revised labor market data this year to show that our state's labor market performance has actually been better than we had been led to believe based on the data available up to this point. I haven't had the time to explore the likely levels that these revisions should take, but the upward revisions to the national data released last Friday gives further impetus to my expectation of upward revision.
So, remember the monthly decline of about 6,000 jobs (payroll employment) a few months ago? I expect it to soon be revised away. Lately, has resident employment been as bad as the existing data and above chart show? I seriously doubt it, especially since resident employment includes Rhode Islanders who work in other states such as Massachusetts that are doing a lot better than we are. We'll just have to wait a few weeks to wait and see the final data revisions. While I expect the labor market here to have been performing better than we though, I don't expect any wild and large upward revisions, so let's not get carried away! After all, direction and magnitude are not the same thing. Had employment here been much higher than we had thought, tax revenues at this point would have risen far beyond the actual levels we have observed.
Posted by Leonard Lardaro at 10:44 PM 0 comments