This past Wednesday I spoke with Buddy Cianci on WPRO. We discussed my Current Conditions Index and a host of other topics. You can listen to this interview by following this link.

Hopefully WPRO will eventually figure out the correct spelling of my last name.

While we're at it, I located a page at WPRO that has listings for all of my interviews during the last six or so months.
Posted by Leonard Lardaro at 9:44 PM 0 comments

The December Current Conditions Index (the report is given in the prior post and on my website) received coverage in local media. Here is my discussion of the index on Channel 10's Business Talk with Frank Coletta. The Providence Business News, as always, gave very nice coverage to the report as well.
Posted by Leonard Lardaro at 7:39 PM 0 comments

Over the past few months, I have been keeping my fingers crossed concerning whether Rhode Island’s current recovery would continue. My greatest fears were that either this recovery would stall or worse yet, end abruptly moving us back to where we clearly don’t want to be. The December Current Conditions Index reading restored my faith on this front for now at least, as the CCI moved beyond its recent two-month stint with a contraction and a neutral reading. For December, the CCI rose to 58, back in the expansion range, as seven of twelve indicators improved compared to a year ago.
As I noted in last month’s report, Rhode Island’s recovery might even have more strength and momentum than recent reports indicate, as we will soon see the labor market data revisions going back to late 2009. If the historical pattern for these revisions holds, prior employment data should be revised (rebenchmarked) higher, which is my expectation at this point. Historically, the December labor market data is often revised, even in “normal” times. Combine this with an economy that has recently shifted into recovery mode, and I don’t exactly find myself with a great deal of confidence in the currently available data for December.
There were several very strong performances among the CCI indicators in December. Retail Sales, one of the foundations upon which Rhode Island’s recovery has been built, improved again, rising by 8.7 percent, capping a strong holiday shopping season. This indicator has now increased for ten of the past eleven months. Another part of our foundation, US Consumer Sentiment, rose for a second time after two consecutive decreases. It’s uptrend remains in effect. The most amazing story of this recovery to me continues to be strength in our state’s manufacturing sector. For December, Total Manufacturing Hours rose by 1.6 percent, powered by yet another increase in the length of the workweek. December marked the fifth consecutive improvement for this indicator, an anomaly for Rhode Island. Along with this, the Manufacturing Wage rose again, by 3.0 percent. The other portion of our state’s good producing sector, housing, improved this month. Single-Unit Permits, which reflects new home construction, rose 3.1 percent in December, but it remains at low levels.
Two other indicators improved in December. Benefit Exhaustions, which reflects long-term unemployment, fell by 13.4 percent, its tenth consecutive improvement, while our state’s Unemployment Rate declined again, from 12.7 percent last December to “only” 11.5 percent this December, partly the result of declines in our Labor Force, which fell by 0.2 percent compared to a year ago.

All of the remaining indicators failed to improve. New Claims, a leading indicator that measures layoffs, rose by 25.4 percent, partly the result of comparison to a clogged-phone period a year ago. Employment Service Jobs, another leading labor market indicator, dropped by 12.6 percent compared to a year ago. Private Service-Producing Employment fell again (-0.2%), but its rate of decline has continued to moderate. Finally, Government Employment declined by 0.3 percent in December. Expect future declines based on the absence of any future assistance from the federal government.


Through December, the available labor market data point to a very fragile state economy. The potentially good news is that revisions to the recent data will be released soon. Typically, in the early stages of recoveries, revisions are higher, so things weren’t as bad as they had appeared to be. I expect that to be the case this time. Hopefully, some earlier CCI values might also be revised higher and things were less bleak than we thought.
Posted by Leonard Lardaro at 7:33 PM 0 comments

The December 2010 data, the existing data at least, are given in the table below. While the Rhode Island's economy has made substantial improvement since its recession, weakness remains. The potentially good news concerns upcoming data revisions (rebenchmarking). With the release of the January employment data (later this month), we will see the revised labor market data extending back to late 2009. If history turns out to be accurate, during the initial stages of recoveries, revisions are to higher values. That doesn't say how much higher, though. I expect some upward revision to the existing data, so things weren't quite as bad as we had been led to believe. But I don't expect truly dramatic changes. We'll have to keep our fingers crossed for that.

Once the rebenchmarked labor market data have been released, I will make one or more posts discussing the changes and their significance.
Posted by Leonard Lardaro at 2:20 PM 0 comments 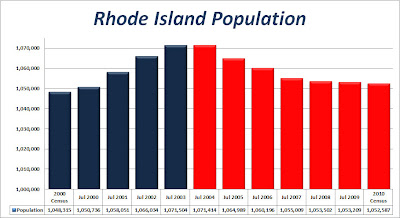 Stay tuned! I will have more about this in coming posts.
Posted by Leonard Lardaro at 10:53 PM 0 comments