Rhode Island's manufacturing sector, like that of the nation, has continued to perform extremely well since 2009. Ironically, 2012 marks the 25th anniversary of Rhode Island being a post-manufacturing economy (here is the basis for this). Since late 1987, when this structural transformation occurred, the sectors that have led in the early stages of recoveries have conspicuously excluded our state's goods producing sector -- manufacturing and construction. So, while construction continues to remain extremely weak and depressed here, adding a further downdraft to our state's already weak economic momentum, manufacturing has provided a welcome boost throughout this entire recovery.

There are a number of reasons why US manufacturing (and related to this -- exports) has done so well. First and foremost is the US Dollar exchange rate. The dollar depreciation that has occurred over the past few years, driven largely by the extremely low interest rates orchestrated by the Federal Reserve, has made exports from the US much more competitive to foreign buyers than they otherwise would be. In addition to this, appreciation of the Japanese Yen has caused production costs there to become unacceptably high to a number of manufacturers, leading them to shift their Japanese production to other countries. To some extent, US manufacturing has benefited from this. Then there is the success of China as an exporter, which has produced upward pressure on manufacturing wages there and upward pressure on their currency, the Chinese Yuan. Finally, political pressure that continues to be applied to US manufacturers has led them to move some of their operations back to the US. The extent to which these factors have benefited Rhode Island manufacturing is not clear at this time. Since a study of this topic would entail due diligence, it is safe to conclude that no such study will ever occur here.

For Rhode Island, much of the recent manufacturing strength has been manifested in a return of the workweek from the highly depressed values it fell to during "The Great Recession" to more typical values. During the past three months, the workweek here has moved beyond the 40-hour level. In February of 2012, the average workweek, 40.7 hours, was the fifth highest length since 2000 (using the new industrial classification system that is as far back as we can go). The chart below (click to enlarge) shows Rhode Island's manufacturing workweek since 2000. 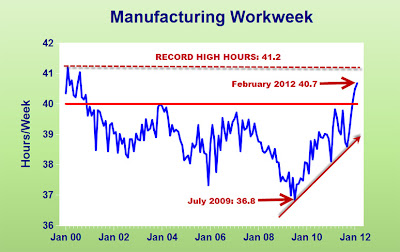 The first thing that stands out in this chart is the well-defined uptrend in the workweek since the trough in July of 2009 (before RI's current recovery began). Second, for the last three months (December of 2011 - February of 2012), the workweek has exceeded 40 hours, something Rhode Island hasn't seen since 2000. Finally, at its present level, the manufacturing workweek in Rhode Island is not very far from its "record" level over this period of 41.2 hours.

So, along with the very favorable workweek behavior comes a potential caveat for the coming months: sustaining or even increasing the workweek in the future will not be an easy task. If the workweek begins to return to more "typical" levels, between 39 and 40 hours, which elements of our state's economy will take the "baton" and help to sustain Rhode Island's forward economic momentum from that time forward? The answer to that question is not at all obvious at the present time. In fact, even with all of this recent welcome manufacturing momentum, the negative forces at work here may well have gained the upper hand, to such an extent that Rhode Island's recovery might actually be over at the present time (see prior post that discusses this).

Let me conclude by noting that the substantially higher workweek we have been witnessing here represents firms substituting hours for the hiring of additional workers. As the inadequacy of the skills of Rhode Island's labor force is not debatable at this point, and as far as I can tell, nobody has ever accused Rhode Island's business climate of being competitive, the cost to firms associated with increasing employment, both in terms of skills and other costs, may well remain unacceptably high for our manufacturing firms for some time to come. This will remain central to defining our state's "limits to growth."

Posted by Leonard Lardaro at 12:33 PM