Rhode Island never seems to do things like other states do. Sometimes that can be a good thing. But when it comes to economic performance, it has proven to be a nightmare: Our nightmare -- an extremely tepid recovery that might now be over.

In my first post on this Blog, I provided a series of charts comparing Rhode Island to the US, New England, Massachusetts, and Connecticut. I have (sadly) updated the most important of them, payroll employment, with the most recent data. The chart below shows this (caution: if you have just eaten, you should probably wait about an hour before viewing this chart. For those who haven't just eaten, click to enlarge): 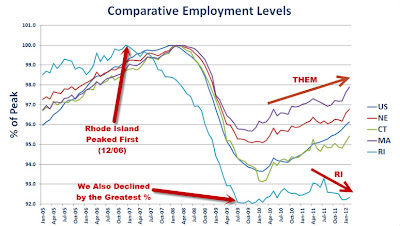 I would hope that most people are aware of the following stylized facts that should be readily apparent from the chart:


An observation: during recoveries, payroll employment is supposed to continually rise. But this is Rhode Island. We don't do things here the same as everywhere else. If you look at my prior few posts, payroll employment in Rhode Island has now declined on a year-over-year basis for the past seven months. That by itself might be a sufficient basis to believe Rhode Island's recovery has ended and we have entered into the early stages of a double-dip recession. At present, I am not quite ready to make that call, but I think it is safe to say that if we are still in a recovery, we're hanging on by our proverbial finger nails.

Posted by Leonard Lardaro at 9:56 AM