Third Quarter GDP Report for the US -- Can We Predict This Before the Report is Released?

The revision to third quarter 2010 GDP was released last week. The original estimate, 2.0%, was revised up to 2.5%, a more "respectable" number than the original. In the first release of each quarter's GDP number, inventories, exports, and imports are all approximated. Subsequent months will use available data to eliminate the "educated guesses" contained in the first estimate. That was the case for today's release. Here is a story discussing the GDP release.

As the official GDP releases represent somewhat "stale" data, we can approximate what they will entail using real-time data from asset markets, which has been a central theme of my classes. To do this, go to StockCharts.com and on the middle right select the PerfChart (this stands for Performance Chart) that deals with the sectors of the S&P 500. To save you time and effort, here is the link. 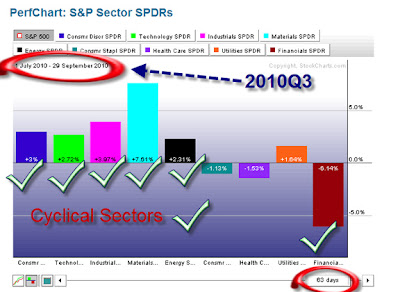 PROCEDURE:
First, choose a bar chart at the bottom left (second button from the left). Then, move the slider (bottom right) to cover the exact time period you desire. Here, I have used the third quarter of 2010.

ANALYSIS:
Observe which sectors have performed better than the S&P 500 index (i.e., outperformed the overall market). This occurs when the S&P 500 button at the top left of the chart is selected.

For the third quarter of 2010, clearly the most cyclically sensitive sectors outperformed the market, with the exception of Financials. Overall, this is a reflection of the growth that occurred during that quarter. Had the defensive sectors (i.e., Consumer Staples, Health Care, and Utilities) outperformed, this would have signaled a potentially weakening economy.

Can this analysis be used to help predict the GDP report before it is actually released? The answer is yes. Asset markets, one of which is the stock market, are leading indicators, which means they tend to move in advance of changes in other parts of the economy. So, current changes in leading economic indicators tend to signal future changes we can expect to observe in the overall economy. 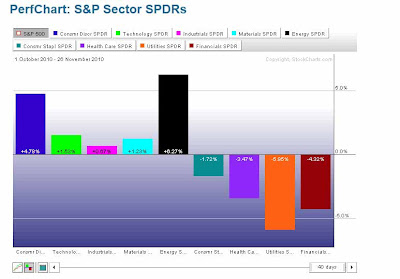 What is the stock market (and its sectors) telling us about the fourth quarter rate of economic growth? The second chart (click to enlarge) shows market performance since October 1. Other than Energy and Consumer Discretionary stocks (which themselves are cyclical), the remainder of cyclical indicators are performing less well than they did in the third quarter. The apparent message is that economic growth in the fourth quarter will be slower than it was in Q3, or spotty at best in comparison.

There are two things that should be noted. First, there is no indication that economic growth will become negative in Q4. Second, the slowing of economic growth these sectors seem to be indicting also affects the defensive sectors, so they are more negative than they were in Q3. Part of this no doubt reflects ongoing worries about the US housing market and the economic stability and solvency of several European countries as well (Ireland, Portugal, Spain, Italy, and Greece, sometimes referred to as the PIIGS, using their first letters). Will economic weakness in Europe diminish the recent momentum the US has been experiencing? The market apparently believe that this is likely.

Let me suggest that you continue to follow the sectors as we move farther into the fourth quarter and see what the market is suggesting. We won't get the initial Q4 GDP data until late in January, so this should be informative in advance of the formal data in January (that will be stale at that point).
Posted by Leonard Lardaro at 11:09 AM 0 comments

Rhode Island’s recovery continued in September, its fourth month. While the value of the Current Conditions Index remained at 58 this month, the list of indicators that improved changed somewhat. While Retail Sales and US Consumer Sentiment have both shown improvement for quite some time now, fundamental to helping the CCI to form its base in the expanding range, both failed to improve in September.  The fact that the CCI was able to remain in the expanding range in spite of both indicators failing to improve is a very positive sign for Rhode Island. Declines like this are not uncommon for indicators that have improved consecutively for many months. This most likely reflects a “pause” for both indicators, as their uptrends remain intact at this point. Improving economic momentum at the national level should benefit both of these in the coming months.

September’s economic data were more positive than the CCI’s value of 58 would appear to indicate. On a monthly basis, eleven of the twelve CCI indicators either improved or were close to improving. Once again, strength in our state’s manufacturing sector led the way, as its rebound continued. Total Manufacturing Hours rose again (+0.9%), powered by yet another sharp increase in the length of the workweek. This indicator has now improved for the last three months, something Rhode Island hasn’t seen since the year 2000. Along with this improvement in Total Manufacturing Hours, the Manufacturing Wage rose gain by a greater than 4 percent rate (+4.2%). The other part of our goods producing sector (Mining doesn’t matter here), Single-Unit Permits, which reflects new home construction, continued its recent roller coaster behavior, rising by 16 percent compared to last September. As noted earlier, Retail Sales failed to improve in September, declining by 2.7 percent compared to a year ago, its first decline in the last eight months. Along with this, US Consumer Sentiment fell (-7.5%), breaking a string of seventeen consecutive improvements.

Our state’s Labor Force rose again, increasing by 0.2 percent compared to a year ago.  While our Unemployment Rate fell to 11.5 percent from August’s value of 11.8, this was once again at least partially the result of monthly declines in our   Labor Force. Benefit Exhaustions, which reflects long-term unemployment, fell sharply again, dropping by 31.2 percent in September, its seventh consecutive improvement. New Claims, a leading indicator that measures layoffs, fell by 2.4 percent versus last September, further erasing the effects of recent consecutive increases. While Employment Service Jobs, another leading labor market indicator, fell by 11.6 percent compared to a year ago, on a monthly basis, this indicator appears to have plateaued since June. Stabilization in this indicator will be critical to sustaining Rhode Island’s newly found recovery momentum. Private Service-Producing Employment fell again (-1.2%), with its rate of decline accelerating slightly in September. Finally, Government Employment declined in September, by 0.2 percent, fueled largely by a decrease in local non-education employment. While visual examination of the data for this indicator seems to show a leveling off, Rhode Island’s persistent deficit woes coupled with the likely absence of any future help from the federal government should cause its eventual deterioration.

September was month four for Rhode Island’s current recovery. While CCI readings remained at 58, barely into the expansion range, the fact that this value was sustained in spite of declines in two indicators that had led the way into recovery is encouraging, as is recent national economic momentum. At this point, let’s hope that this momentum can be sustained, especially as the next fiscal year approaches.
Posted by Leonard Lardaro at 8:35 PM 0 comments

The September data for Rhode Island show an economy that is continuing to improve. The table below (click to enlarge) gives the values for a number of key variables. Note that a number of the values from last September were fairly weak, making them easy "comps" and not too difficult to beat. Most notably, two of our strongest performers of late, Retail Sales and US Consumer Sentiment, failed to improve in September from a year ago. But other variables stepped in to take their place among improving parts of our economy.

Happily, I can say that Rhode Island's current recovery, which began in June of this year, has continued through September and shows no signs of disappearing.
Posted by Leonard Lardaro at 11:43 AM 0 comments