At this point, I have published a fairly large number of posts. If you want to see the words that have appeared most frequently, below is a word cloud of this blog up to now (click to enlarge). 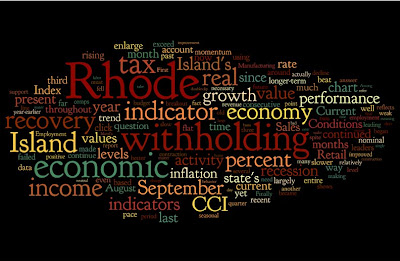 If you have been following what I have been saying about the performance of the Rhode Island economy over the last year, you know that things here have been deteriorating. Rhode Island has been in a recovery since February of 2010. Throughout 2010, the pace of economic activity here was substantial (relative, of course, to where we had been in "The Great Recession."). But since March of this year, my Current Conditions Index (CCI) has failed to match or exceed its year-earlier value. This, of course, indicates that the pace of economic activity here has slowed. In fact, based on this recent inability to match or exceed year-earlier values and that the CCI averaged its neutral value of 50 over the third quarter of this year, I characterized Rhode Island's economy as being "dead in the water."

Another way to see visualize this is with a graph of the CCI's values by month over the last three years (click to enlarge). I don't think I need to add much discussion to this chart, a picture like this is worth a thousand words, as the old saying goes. 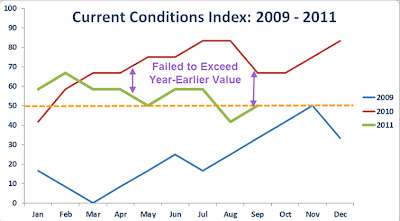 So, at the present time, 2010 appears to be "the good old days." As we contrast last year with what is occurring now, it seems inevitable to get a sinking feeling.
Posted by Leonard Lardaro at 11:49 PM 0 comments

This is an abbreviated version of the September Current Conditions Index report. For the tables, historical reports, and more information, please visit my web site: http://www.llardaro.com . I made my monthly appearance on Channel 10 this morning. Here is a link to that interview. And, as always, the CCI received excellent coverage in both the Providence Business News and GoLocalProv.com.


The third quarter ended with a whimper, as the Current Conditions Index for September rose back to its neutral value of 50, as only six of the twelve CCI indicators improved. While that’s hardly cause for celebration, at least September’s CCI was better than the contractionary reading of 42 for August.

For the entire third quarter, the CCI averaged 50 — flat economic activity. Perhaps more disturbing is the fact that September marked the seventh consecutive month for which the CCI failed to meet or exceed its year-earlier value. At this point, I think it is safe to conclude that Rhode Island is no longer near stall speed, the conclusion I reached in last month’s report: we are now pretty much “dead in the water.” Yet in spite of this lack of positive momentum, I remain unconvinced that Rhode Island’s economy has actually entered a period of contraction. In other words, as bad as the data are, I do not believe that Rhode Island has  fallen into a recession at the present time. However, I have now upgraded my assessment of the likelihood that Rhode Island falls into a recession this fiscal year from 50 to 60 percent.
September’s data reveal yet another very weak economic performance. Not only did half of the CCI indicators fail to improve, several of the improving indicators displayed a continued  loss of momentum. Worse yet, two of the improving indicators  should be viewed with  extreme skepticism. First for the bizarre.
The Manufacturing Wage surged by 16.3 percent in September, on top of increases of 14.7 percent in August and 12.7 percent in July. Rhode Island’s Manufacturing Wage had been at levels around a decade behind the US average. At this pace, that gap should be entirely eliminated by the end of this year! Our state’s Unemployment Rate fell to 10.5 percent in September, in spite of declines in both payroll and resident employment. This was in large part due to yet another decline in  our state’s Labor Force. View this jobless change with a rather large “grain of salt.”
Among the remaining indicators that improved, Private Service-Producing Employment, while still growing, continued to grow more slowly, falling below one percent growth this month. Unfortunately, much of the benefit from even this slower change was offset by yet another sharp decline in Government Employment (-2.8%). The questions concerning this indicator are when and at what level will it ultimately stabilize? Total Manufacturing Hours, a mainstay of this recovery was effectively flat in September, rising by 0.02 percent. Still, this indicator has risen, albeit at ever-decreasing rates for fifteen consecutive months. Retail Sales surged by 17.2 percent in September, its third improvement in the last four months, in spite of the continuing deterioration in US Consumer Sentiment, which fell again at a double-digit rate (-12.7%). Finally, Benefit Exhaustions, a reflection of longer-term unemployment, improved again, but at a slower rate (-9.1%).
Among the remaining indicators, Employment Service Jobs, a leading labor market indicator, fell by 2.1 percent in September, although its level may well have bottomed. Single-Unit Permits, which reflects new home construction, declined by 16.7 percent in September, after two months of improvement. Clearly, new home construction here remains at very depressed levels. Finally, New Claims, a leading labor market indicator that indicates layoffs, rose by 29.7 percent, its third consecutive failure to improve. We may well have moved into a period of rising layoffs, a trend that could seriously undermine our future economic momentum.
Posted by Leonard Lardaro at 2:51 PM 0 comments

A Chart of the Future Direction of Rhode Island's Economy

It has been abundantly clear from the performance of my Current Conditions Index over the past several months that Rhode Island's economy has continued to slow. As of the most recent report (August 2011), I reported that Rhode Island is essentially at "stall speed."

To understand what is actually happening at the present time, we need to revisit what occurred during the last recession. As that recession continued, the levels of many key economic indicators became so beaten down that they ultimately couldn't fall much further. So, the seeds for the present recovery began to emerge as our state's economy began to decline at slower and slower rates. I wish I could say that this was related largely to Rhode Island's leaders reinventing our state's economy and eliminating most of the structural weaknesses that continue to haunt us to this day. But, this is Rhode Island. The operating procedure of our state's leaders then, which continues to this day, can be summed up with a single word: Mañana.

Our long recession finally ended and economic growth returned around February of 2010, which is the date I place on the beginning of this recovery. As I have discussed in previous posts, this did not then, nor does it mean now, that we have returned to "normal" activity levels. What actually occurred is that the greatly diminished levels of many key variables eventually became relatively easy to beat. So, we finally began to beat these weak "comps," and we improved from there. Our rate of growth thus became positive, and for the remainder of 2010, Rhode Island's economy performed fairly well, certainly far better than it had in the prior three years!

What we are witnessing now is the "second act" of this play. We were able to handily beat the weak comps throughout 2010, but for this recovery to continue, we have to beat ever-improving comps through time. For this to occur, our rate of economic growth must be sustained or even accelerate, and the breadth of overall economic activity must expand.

As my Current Conditions Index shows, CCI values for 2011 have lagged the corresponding levels for the prior year since March. Thus, our economy's rate of growth has continued to moderate. Given the values for July and August, there is even some question in my mind as to whether there is much growth at all.

An excellent way to see the manifestations of the above discussion is to view Retail Sales for Rhode Island. As I have done on other occasions, I converted this to its real (inflation-adjusted) value, since Retail Sales is in current dollars, and its behavior can be distorted by inflation. The chart below shows this since 2007 (click to enlarge): 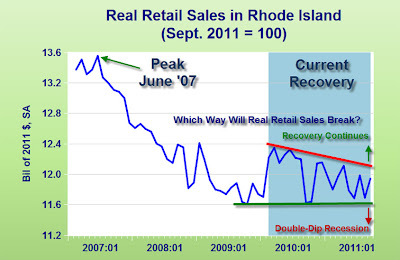 The first thing that should jump out at you is how far real Retail Sales today are below their peak in mid-2007. This is not unique to Rhode Island -- the levels of many variables today remain far below what they once were in the "good old days" of leverage and debt accumulation. Focusing on the present recovery (the blue shaded area), real Retail Sales have been largely range bound, displaying lower highs throughout this entire recovery, with a floor (or "support") around the $11.6 billion level.

It is this indicator, Real Retail Sales, that can serve as the proverbial "parakeet in the coal mine" with respect to the future (cyclical) direction of Rhode Island's economy. Based on the way this indicator has behaved throughout this recovery, there will either be a breakout above the red line (resistance) or a breakdown below the green line (support) in the coming months.

A breakout, which is what we should all be hoping for, will indicate that the present recovery is continuing. For this to occur, it will be necessary for employment to continue rising, which at the present time means that it returns to an uptrend. Along with this, tax revenue would continue to provide us with pleasant surprises, helping us moderate budget deficits.

A breakdown, the dreaded outcome, would reflect that our state's economy is unable to sustain its current growth and breadth of activity, meaning that we are headed into a double-dip recession. This would be accompanied by falling employment, increasing unemployment, declining tax revenue, and a rising budget deficit. The actions required to restore budget balance would inevitably further slow the pace of economic activity.

So, the ultimate question is which way is Rhode Island headed? Had our leaders used the past crisis ("The Great Recession") to reinvent our state's economy, making it more competitive with greater exposure to growth-oriented sectors, the most likely outcome for us would have been a breakout above with continued recovery. While a crisis is a terrible thing to waste, the inaction of our state's leaders, guided by their primary leadership principle -- Mañana, means that Rhode Island wasted the opportunity afforded it during the last recession to make meaningful structural changes to our state's economy. We once again find ourselves "flat footed," largely at the mercy of national and global economic momentum.

Ironically, the world has changed -- national economic momentum is largely influenced by global trends, especially what is occurring in Europe. So, even the US is no longer the master of its own fate. The real question for us thus becomes exactly what is it that Rhode Island is the master of?
Posted by Leonard Lardaro at 10:52 PM 0 comments