Believe It Or Not, Our Jobless Rate Could Be Worse

The last several posts have explored why Rhode Island has such a high unemployment rate. As of February, 2012, we have regained the dubious national rank of #2. If you saw the February labor market data for Rhode Island, the one number that probably stuck out was that our state's unemployment rate returned to 11 percent from just below that level the prior month. As for good news, the local media seemed to focus primarily on the 500 gain in payroll employment (seasonally adjusted). Actually, don't be very confident that the 500 gain will survive the data revisions associated with the release of the March data.

By now, you should be aware of how many ironies permeate the existing labor market data for Rhode Island. To say this state is idiosyncratic is an understatement. So, let's delve into even more possible "confusion," focusing on labor force participation here and how its bad news has ironically translated into less horrible news for our jobless rate. 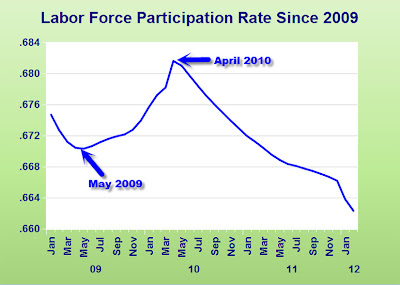 Based on my Current Conditions Index, Rhode Island's present recovery began in February of 2010. As the above chart shows, Rhode Island's labor force participation rate has been declining throughout almost this entire recovery! So much for a pro-cyclical participation rate. Keep in mind, however, our state's employment rate has also been falling for quite a while (see prior post).

The irony associated with our state's declining participation rate is that it has actually kept Rhode Island's unemployment rate lower than it would have been had our state's residents not continued to drop out of the labor force. This is the "bad news translating into less horrible news" I referred to above.

All of this leads to an obvious question: How much higher would Rhode Island's unemployment rate have been were it not for the "benefit" of our declining participation rate? In order to approximate this, I performed a quick econometric simulation, assuming that our participation had not been declining from its most recent peak in April of 2010. The results are not pretty, nor are they unexpected. The chart below compares the actual and simulated unemployment rates here since 2009 (click to enlarge if you have a strong stomach!). 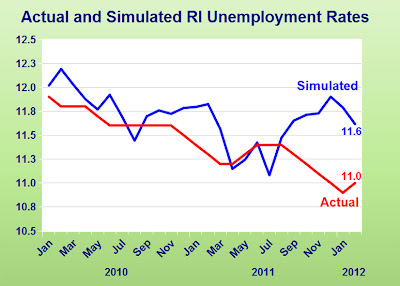 Instead of having an 11 percent unemployment rate for February of 2012, my simulation produced a rate of 11.6 percent. In the above chart, note the divergences between actual and simulated unemployment rates since August of last year. About the only good thing that can be concluded from this chart is that the two series have gotten closer of late. That is hardly a source of comfort, however, especially since at an 11 percent rate, Rhode Island has a national rank of second overall.

In conclusion, is Rhode Island's declining labor force participation rate a major problem? Indeed it is. Not only is it the logical result of a truly deplorable labor market, where both payroll and resident employment have been falling on a year-over-year basis for quite some time now. It may single-handedly be preventing Rhode Island from reclaiming its prior title as the highest unemployment rate in the entire United States!