Has Rhode Island Entered Into A Double-Dip Recession?

I  have made several posts recently that deal with the rebenchmarked payroll employment data from a fairly long-term perspective. In this post, I will provide you with two charts that illustrate the shorter-term behavior of payroll employment for Rhode Island. These charts are very disturbing, illustrating that on a year-over-year basis (i.e., comparing a given month with the same month one year earlier), payroll employment here has either been declining or flat for six consecutive months. Is this the beginning of a recession? More about this below.

The first chart (click to enlarge), contains an alarming element: the magnitudes of the payroll employment declines have been worsening for the most recent two months of data, in spite of the fact that national economic activity has been improving. 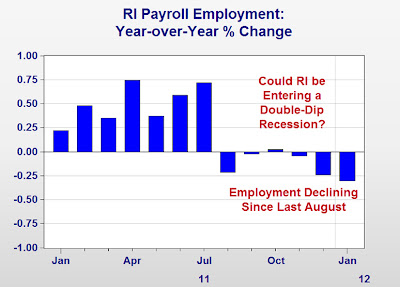 The second chart (click to enlarge) shows the underlying basis of the chart above: job gains and job loss since 2009. 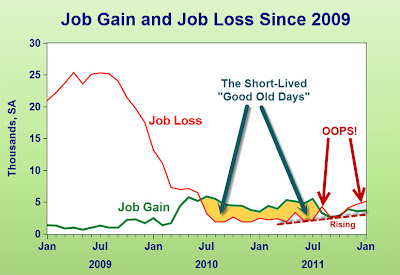 Note that the monthly employment change is the difference between job gain and job loss for each month, in spite of how this is reported by our local media. I find it very striking to see how much job loss here has declined since 2009. Sadly, job gain hasn't done much since the first part of 2010. And, over the past year, job loss appears to be accelerating at the same time that job gains are dissipating.

To some, the information in these charts might be enough to make a recession call -- that Rhode Island had indeed entered into the second "dip" of a double dip recession. I am not quite ready to make that call just yet. A recession or recovery call should be predicated on the behavior of a broadly based set of economic indicators, not just a single indicator, even one as important as payroll employment. This, of course, is what my Current Conditions Index (CCI) was designed to do. Based on the behavior of the CCI, I have to conclude that it is premature to say that Rhode Island has entered into a recession at this time. But it is safe to say that Rhode Island's economy is hanging on by its finger nails!

For anyone who thinks that the austerity engaged in by Rhode Island's cities and towns has not had a negative impact on Rhode Island's economy, guess again. It is one of the more critical elements of Rhode Island's most recent malaise. Of course, let's not forget the fact that Rhode Island's tax and cost structure continues to be highly non-competitive, driven in large part by the lack of skills of our state's labor force (for those who decide to stay in-state, at least). Apparently those two elements have been more than sufficient to offset the beneficial effects of the improving national economy on the economy of Rhode Island. Sadly, austerity here will continue, as will the non-competitiveness of our state's tax and cost structure. Has Rhode Island become immune to national growth for the next few years? I sure hope not. But we'll have to wait and see.

Next Post: How is resident employment, the "other" employment measure for Rhode Island, performing? Surely, it can't be doing as badly as payroll employment, can it? Or can it?
Posted by Leonard Lardaro at 11:29 PM