Is the Recent Decline in RI's Labor Force an Anomaly?

Yesterday we received the April labor market data for Rhode Island. While many celebrated the fact that our state's jobless rate fell below 9%, I raised the question, as I have on numerous occasions over the years, about whether or not this is truly cause for celebration. Clearly, a lower jobless rate is preferred to a higher one. However, is important to assess not only the level of the unemployment rate but the reasons that underlie how (and why) it is changing.

My guess is that many people here believe that the April decline in our labor force that accompanied our jobless rate improvement really isn't very important, and that somehow this was a one time or rare event. Instead of my stating what I believe is the only reasonable conclusion here, I will let you judge for yourself. Below is a chart (click to enlarge) that shows Rhode Island's labor force and unemployment rate dating all the way back to 2009. Included in this chart is a vertical line denoting when the current recovery began (in February 2009). 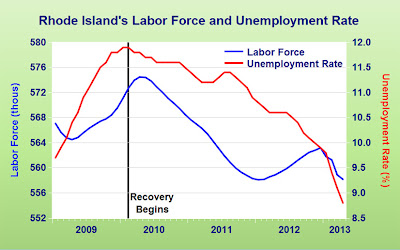 I believe the graph illustrates rather conclusively that the combination of declines in both the unemployment rate and labor force is not the exception, but instead has been the rule over this entire period with few exceptions. Let me state that even prior to 2009, there were more instances that I can remember where we saw this combination of declines in both our unemployment rate and labor force.

In fact, when I designed my Current Conditions Index (CCI), I explicitly took this relationship into account, which I would not have done for any other state. Specifically, I included as two separate indicators the labor force and the unemployment rate. The significance of including them as a pair arises from months like April: an improving unemployment rate is a +1 for the monthly CCI value, while the decline in the labor force is a -1. The result is that these two changes cancel, leaving the  monthly CCI value unchanged. Therefore, a decline in Rhode Island's jobless rate by itself does not necessarily improve the Current Conditions Index value for a given month.

Let me conclude by noting a unique fact for Rhode Island. Rhode Island is the only state that has been consistently losing population since July of 2004. In general, a smaller population adversely impacts the size of a state's labor force. In the coming months, this will make it more difficult for Rhode Island to reverse the well-established downtrend in its labor force.
Posted by Leonard Lardaro at 11:00 AM 0 comments