This is an abbreviated report of the Current Conditions Index for March of 2012. If  you are interested in reading the entire report with tables and The Bottom Line, please go to my web page: http://www.llardaro.com .

In my report last month, I noted that based on the existing labor market data being released by the RI Department of Labor and Training, “ … it is no longer clear whether the Rhode Island is still in a recovery or whether it has moved into the earliest stages of a dreaded double-dip recession. Payroll employment has now declined for seven consecutive months on a year-over-year basis … For many, this alone would be a sufficient basis upon which to make the recession call.”

After my report was released, I was informed by the RI DLT that the current labor market data has been understating job change, and that employment has been rising for some time now. So, remember all the data they were and are still publishing and the conclusions anyone serious about analyzing our state’s economy would arrive at based on them? To quote Emily Litella of Saturday Night Live fame: “Never Mind.”

So, in an odd and circuitous way, my overall conclusion last month that Rhode Island has not entered nor is about to enter into a recession proved to be correct. And, in spite of what the data published by the DLT now say, our state’s March Unemployment Rate is not 11.1 percent, but somewhat lower, likely in the 10-11 percent range.

All of this requires that I adapt CCI values. Since existing labor market data are very likely understating two CCI indicators, Private Service Producing Employment and Employment Service Jobs, I will now be providing two CCI estimates each month until the data flaws disappear (hopefully) next February.

Rhode Island ended the first quarter of 2012 on a positive note, as a re-acceleration from the mid-2011 doldrums materialized. While Current Conditions Index values based on the faulty existing labor market data continued to show readings barely above stall speed (the top values), allowing for likely data revisions, the CCI beat or tied its year-earlier values for every month in the first quarter (the lower values). As of March, Rhode Island’s current recovery reached its 25th month.

On a year-over-year basis, four of the five non-survey-based CCI indicators improved. All five showed improvement on a monthly basis. Retail Sales increased by 4.4 percent, its seventh consecutive improvement compared to year-earlier values. While part of this is no doubt related to the skilled Rhode Islanders we rent out to neighboring states who bring their income home with them, Retail Sales momentum clearly does have “legs” at present. Along with this, US Consumer Sentiment rose as well, by 13 percent. Both of these indicators had March values that exceeded their February levels. New home construction, based on Single-Unit Permits, continued its roller coaster ride, falling by 14 percent in March relative to last year. But it too managed to improve relative to February. New Claims for Unemployment Insurance, a leading labor market indicator that reflects layoffs, declined by 7.1 percent, its fourth improvement in the last five months. It too showed strength relative to February. Finally, Benefit Exhaustions, reflective of longer-term unemployment, also fell, at a double-digit rate.

In the last post I demonstrated that significant differences often emerge when values are adjusted for inflation. Even though all of our transactions are in terms of current dollars, meaning inflation is not explicitly taken into account, what matters most is real, or inflation adjusted values. This distinction is critical. As we saw earlier with respect to retail sales, and I will now demonstrate with labor income, even though current dollar values might indicate that things are going fairly well, when inflation is taken into account, a very different story emerges.

At the recent Revenue Estimating Conference, there was a good deal of discussion of something I discussed a few posts ago, that the labor market data will be revised higher than what the currently-published values show. That was and continues to be welcome news. The discussion then moved to labor income, which economist refer to as wage and salary disbursements (WSD). Clearly, this indicator has been doing fairly well recently and Rhode Island it has certainly moved beyond the lows it experienced at the depths of "The Great Recession." Should we interpret this as indicating that we have returned to where our economy needs to be, or that we have made a very substantial recovery up to this point? I'll let you judge for yourself. The chart below (click to enlarge) shows current dollar wage and salary disbursements for the US, New England, Massachusetts, Connecticut, and Rhode Island. All of these are expressed as a percentage of their value in the first quarter of 2005 (that is the value of 100). 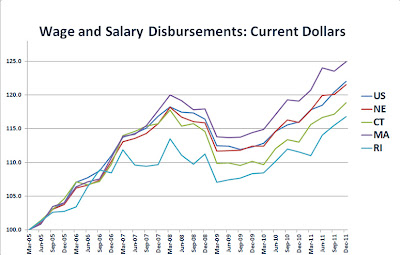 If you've been following this blog, the pattern shown in the above chart should not be unexpected: Rhode Island's peak occurred at a value well below that of the other entities in the chart. And while the level of its WSD has been growing since its most recent trough in Q1 of 2009, it remains significantly lower than everyone else in the chart. The interesting feature is that Rhode Island's peak occurred at the same time as that for everyone else, in Q1 of 2008. Also, note that at present, wage and salary disbursements exceed that 2008 peak for everyone in the chart.

Since the first quarter of 2009, Rhode Island's wage and salary disbursements have clearly been growing. At present, they are in a very well-defined uptrend. Based on this, should we then conclude that the recovery here is proceeding nicely?  To many people the answer is definitely yes. To make a meaningful judgment about this, however, it is necessary to delve deeper and to take inflation into account. In other words, it is necessary to examine the behavior of real wage and salary disbursements. The next chart (click to enlarge) shows this over the same time period. 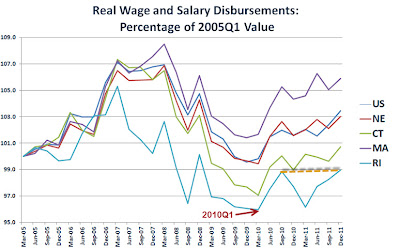 In what should come as a surprise to almost nobody, when inflation is taken into account, things aren't quite as rosy. This is especially true for Rhode Island. And, let's be honest, Connecticut isn't doing that great either. For Rhode Island, while we have managed to move above our trough in Q1 of 2010, we have only been able to return as far as our most recent peak, in Q3 of 2010. Rhode Island is the only entity in the above chart that has failed to move above its value for that quarter.

Will Rhode Island move above that value? In order to see what is necessary for this to occur, I need to quickly review a  relationship concerning real values:

Note from this that nominal growth (meaning current dollar growth) does not guarantee real growth. For real growth to occur, one hurdle must be surpassed. That hurdle is the rate of inflation. Therefore, if real wage and salary disbursements here are to break their most recent peak, it will be necessary for them to grow at a rate faster than inflation, which is currently around 2.0 to 2.5%.

Were the currently-released labor market data accurate, this might be fairly unlikely. Happily, the better-performing revised data make this highly likely. But even though our state's labor market is performing better than we had been led to believe, it's still not growing at rates resembling that in the rest of New England, the US, or southern New England, at least on a consistent basis. So, it's safe to say that while Rhode Island will break its recent peak in real WSD, it will  continue to lag the levels attained by all of those entities.