Our State's Jobless Rate is Declining. Is That Good News?

In recent months, Rhode Island's unemployment has been falling. In fact, whenever the monthly labor market numbers are released, the local media focus largely, if not entirely, on the unemployment rate and how it changed. So, based on these recent declines, Rhode Island's economy must be doing noticeably better. Or is it?

First, it is critical that this statistic be viewed in relative, not absolute, terms. While Rhode Island's unemployment rate has fallen from 11.5 percent, its level from August through December of 2010, to 10.8 percent in June of 2011, it remains the third highest in the entire US! So, Rhode Island continues to be known for its beautiful beaches and its very high unemployment rate. Quite a niche, isn't it? Let me also state for the record that I don't believe that our state's jobless rate was constant over that long of a period. The single value for the entire August to December of 2010 period is doubtless the result of a smoothing procedure utilized by the US Department of Labor.

Second, we must not forget to consider the way the unemployment rate itself is calculated. To be counted as unemployed, and therefore part of the monthly statistic, an unemployed person must be unemployed (obviously), physically able to work, and this is the kicker, actively seeking employment. What that last condition indicates is that it is quite possible for the unemployment rate the fall not as the result of higher employment, as most people think has to be the case, but because unemployed persons opt to cease their active job search. In economics, this is known as the "discouraged worker effect." Actually, that's a pretty dumb name, since these people obviously aren't working and they're well beyond being discouraged. So, if an unemployed person stops actively seeking employment, that person is no longer counted as being part of the labor force, and is therefore not counted as being among the "officially" unemployed. In light of all of this, you should always view the unemployment rate and labor force participation together. Has this odd combination of declining labor force and falling unemployment been occurring in Rhode Island lately? A picture is worth a thousand words. The chart below (click to enlarge) shows these two elements in Rhode Island for the last twelve months. 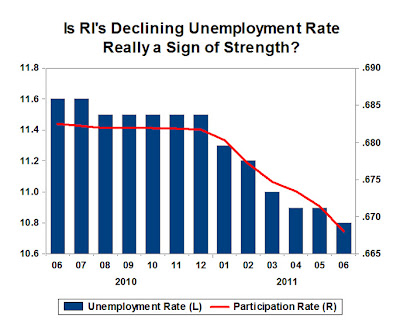 Do you see a pattern here? Actually, how can you miss it? For the entire time that Rhode Island's unemployment rate has been declining (all of 2011), our state' labor force participation rate has been declining as well. Note: the labor force participation rate  (the red line in the chart above) is the percentage of our state's working age population that is in the labor force. Based on the chart above, there is definite evidence consistent with recent declines in our state's unemployment rate being at least partially related to Rhode Island residents dropping out of the labor force (as they stop actively seeking employment). And there can be strange results from the monthly Household Survey (see previous blog post on this). But this doesn't tell the entire story.

Third, there are actually two labor market surveys. The unemployment rate is obtained from the Household Survey. I won't tell you how small the sample size is for Rhode Island. This survey looks at Rhode Island's working age population and does not restrict employment to being exclusively within Rhode Island. So, Rhode Island residents working in other states are included in this survey, as are self-employed individuals. The other labor market survey, the Establishment Survey (and approximations to this by the Current Employment Survey in the short-term), focus exclusively on jobs within Rhode Island. Self-employed individuals, however, are excluded from this survey. So, given these differences, it is not uncommon for the two surveys to give different results, sometimes very different results. In recent months, survey results were noticeably different at times. Fortunately, though, the results for June were more in line with each other. Looking at recent results for this employment survey, job gains since January of this year (compared to a year ago), rose from 4,100 to a high of 9,400 in May, before declining to 8,800 in June. Throughout that time period, job loss fluctuated between 4,100 and 5,100. So, the net change in payroll employment here (what the local media inevitably reports as "new jobs" has actually been in an uptrend since January of this year. For the most recent three months, the net change in employment has been greater than 4,000. Thus, part of the reason for our state's declining unemployment rate over this period has in fact been for the "right" reason - improving employment (also see previous blog post dealing with this).

Finally, the unemployment rate is what economists refer to as a lagging indicator. In other words, its behavior this month to a large extent reflects events and trends that occurred in past months. Embodied within the way the unemployment rate is calculated is the likelihood that when an economy begins to improve, some discouraged workers will begin to actively seek employment once again. When that happens, they are once again counted as being part of the labor force and unemployed. This will often result is an increase in the unemployment rate, not a decrease, as one would normally assume when economic conditions improve. Rhode Island's declining participation rate itself is a net change of persons leaving (discouraged workers) and persons re-entering the labor force once they re-commence active job search.

So, has Rhode Island's economic performance, as summarized by the recent performance of its jobless rate been improving? Yes and no. Unequivocally! To summarize: Rhode Island's unemployment rate has been improving of late, yet it remains among the highest in the US; improvements in our state's jobless rate are not entirely the result of a better employment climate, but at least partially the result of our unemployed dropping out of the labor force.

MY REQUEST TO THE LOCAL MEDIA (an economist's pathetic plea!):
Please stop focusing so much on our state's unemployment rate, it is not a very accurate basis for portraying our state's overall economic performance. You need a much broader basis to do this accurately, such as my Current Conditions Index.

If, however, you opt to continue using the unemployment rate as your primary basis for assessing economic activity here, when you drive home after writing your story, only look in your rear view mirror for guidance the entire time (a practical example of relying on a lagging indicator). Let's see whether or not you make it home in one piece!
Posted by Leonard Lardaro at 11:23 AM