The labor market data for May of 2011 have now been released. As always, Rhode Islanders and their media focused on the unchanged unemployment rate from April, 10.9%. And, in numerous stories, employment was described as "adding 1,300 jobs compared to April." If one goes behind the numbers, as I always do, there's a lot more going on, and as always, the jobs added figure that was reported was incorrect.

Perspective: I highly recommend that persons consider not just looking at data like this by focusing on the change from one month to the next (called month-to-month, or M/M). Very often it gets revised, so what we think happened this month ends up being changed, for better or worse, the next month. While it is useful (albeit fleeting) to look at month-to-month change, it is preferable to consider both what happened compared to a year ago (called year-over-year, or Y/Y) and the one-month change.

Unemployment Rate: Looking at Rhode Island's unchanged (M/M) unemployment rate in May, 10.9%, this was well below its level last May's value of 11.7%. However, our state's labor force fell over this period, by a number roughly equivalent to the decline in the number of unemployed. Conclusion: the "improvement" in our state's jobless rate from a year ago was largely due to unemployed Rhode Islanders dropping out of the labor force which statistically lead to their no longer being counted when the rate was calculated.

Another point I need to make concerns an extreme rarity that occurred with the May data. Unemployment data along with the number of working Rhode Island residents comes from the Household Survey. Forgive me as I provide the basic labor market identity:


LF = E + U
or Rhode Island's labor force (LF) for any period is the sum of the number employed of employed Rhode Islanders (E), referred to as resident employment, plus the number unemployed (U) Rhode Islanders. Here's the rare occurrence we witnessed with the monthly data (change from April to May of 2011):
Change in LF = -1,400
Change in E = -1,400
Change in U = -100
Obviously, there is rounding error here which should be overlooked. Here's the oddity: while our state's unemployment rate remained unchanged at 10.9%, there were 1,400 fewer Rhode Island residents employed (we'll overlook the change in U here). How and why would employed Rhode Islanders drop out of the labor force? It would be very easy to explain why unemployed persons would drop out -- lack of job opportunities. But employed??? The best explanation I can come up with is that a number of self-employed Rhode Islanders weren't doing so well and packed things in (literally). I guess they then went to a status where they opted not to look for work, leading to roughly similar declines in resident employment and the labor force. Will this oddity be present when the June data are released in a month? I wouldn't at all be surprised if it disappears!
Employment: As if all of this weren't confusing enough, there are actually two separate measures of employment. The first, presented above, from the household survey, is resident employment, the number of Rhode Islanders working, whether in Rhode Island or somewhere else. There is a second survey, the establishment survey, that counts the number of jobs in Rhode Island, or payroll employment. Unlike resident employment, this measure does not count self-employment. And, in order to compare adjacent months, the data must take seasonality into account, using seasonal adjustment.
Comparing month-to-month changes in employment, for resident employment, there was a decline of 1,400 (see above). For payroll employment, the gain that was reported was 1,300. The fact that there were different changes in both measures is not uncommon. What must be taken into account, however, is that the payroll employment figure for jobs added is almost always reported incorrectly.
To give a sense for why this is so, let me change to year-over-year payroll employment change, the measure I pay most attention to since monthly changes are often modified the next month. The chart below (click to enlarge) gives the number of jobs added and jobs lost over the last year. 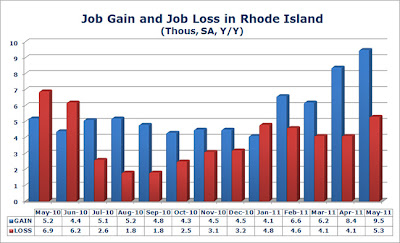 Let's focus on May of 2011. For that month, Rhode Island had job gains of 9,500 versus job losses of 5,300. The net change in employment (year-over-year) was therefore 4,200. The local media, however, always reports this as 4,200 jobs added, which is clearly incorrect. Since February of this year, job gains in Rhode Island have clearly accelerated. Sadly, job loss has remained stubbornly high, leading to overall employment growth (i.e., change) of less that one percent (0.9% for May).
So, this look into the labor market data released each month should illustrate that there's a lot more going on than any simple explanation can accurately conclude. Keep in mind that there are two labor market surveys, not one, and these often reflect different forces at work and thus come to different conclusions. And, for someone who has been following all of this in depth for as long as I have, sometimes I don't even understand all of what's going on. I guess that's why God invented data revisions!
Posted by Leonard Lardaro at 2:26 PM