Just When You Thought Things Here Couldn't Get Worse!!

In the prior few posts, I outlined how badly Rhode Island's payroll employment has been performing of late. In fact, in the last post I raised the possibility that Rhode Island might actually have entered a double-dip recession. While this is a distinct possibility, I am not necessarily willing to embrace that conclusion -- yet. In this post, I will show the recent behavior of the "other" kind of employment: resident employment.

What makes life interesting for persons like myself who follow Rhode Island's economy is that the two employment series are derived from different surveys.

Payroll employment comes from the Current Employment Survey (CES) for the near-term results, which are estimates of the far-more inclusive Establishment Survey. Synchronizing the results of these two surveys, which occurs with the new January data each year, is called rebenchmarking. Think of payroll employment as the number of jobs in Rhode Island, as these data are derived from surveys of employers in this state.

Resident employment is obtained from the Household Survey, which as its name implies, is a survey of Rhode Island residents obtained from individual households in this state. Values of this series too are often revised along with the new January data each year.

You saw the recent behavior of payroll employment in the prior posts. It has deteriorated during the last six months. What about the behavior of resident employment? The chart below (click to enlarge) shows Resident Employment for Rhode Island since 2009. 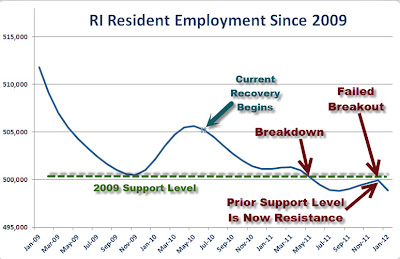 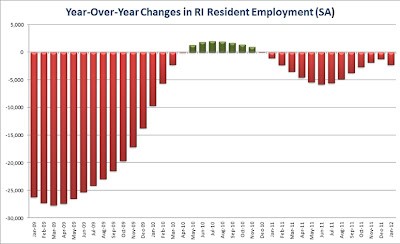 This would be a very strong chart if we were to turn it upside down. Unfortunately it has the correct orientation. The bright moments for Rhode Island, then, the relatively small number of green bars that indicate year-over-year increases, occurred during the May through November of 2010 period. I guess it is safe to say that for Rhode Island: "Those were the "good old days."

What this rather scary chart reveals is that the factor dominating changes in the household survey for a number of years now has been Rhode Island's declining population. Remember, our state's population has been shrinking consistently since July of 2004  -- yet another dubious distinction for Rhode Island. The pace of economic activity here has helped at times, as have job prospects for our residents in Connecticut and Massachusetts. However, I have to conclude that what this chart really illustrates is the set of major structural negatives and problems facing Rhode Island. At present, are we really the "masters of our own fate?" Even if we are, there are serious questions about how much longer that status would remain intact.
Posted by Leonard Lardaro at 11:01 AM