One More Thing To Worry About

I was struck a few weeks ago when the third quarter personal income for Rhode Island was released and it indicated that our state's personal income fell. I quickly went to the Bureau of Economic Analysis' web site (www.bea.gov) and looked over the various components of Rhode Island's personal income change. In a very short time my general presumption was confirmed: a fairly substantial decline in transfer payments did Rhode Island in. This can be further summarized with just two words: unemployment insurance. This might seem like good or neutral news, but it is not. A little background on this should help to explain why.

The way that our state's economy is "built," which is true of all other states and the nation as a whole, is that when economic conditions deteriorate, be it from a slowing of economic growth or a full-blown recession, the resulting decline in income is "cushioned" by changes in transfer payments. If you are not familiar with what transfer payments are, these are transfers of income from taxpayers to persons based on their qualifying for programs such as unemployment insurance, food stamps, welfare, etc. You might know these by another name: entitlement spending. They get this name from the fact that government does not (contrary to its wildest dreams) set the total amount that is ultimately spent on these programs. Instead, government merely sets the criteria for entitlement along with various parameters that pertain to amounts paid and the maximum duration of benefits.

What, then, determines the amount that is ultimately spent on entitlements? This is based on how well or how badly the economy performs. So, as noted earlier, during times of economic weakness, as income declines, more people satisfy the criteria for entitlement to various programs, and they are allowed to receive the benefits they have qualified for. As this occurs, transfer payments or entitlement spending automatically rises, helping to offset weakness in income. It is important to be clear that the resulting increases in transfer payments are never large enough to totally offset income declines. The offset is only partial.

At this point, a few points need to be stated. First, there are two types of entitlement programs: those that are cyclical, and hence related to the overall level of economic activity, and secular-based entitlements like Social Security and Medicare. In this post I am only referring to the cyclically based entitlements. Second, cyclically based transfer payments and entitlements are countercyclical -- spending on these programs moves in the opposite direction of the overall economy by design. Finally, because spending on these rises during weak economic times, these add an element of stability to  the overall economy. Economists often refer to this as "automatic stabilization."

Equipped with this background, a chart of quarterly wage and salary income for Rhode Island along with transfer payments (both expressed as percentages of personal income) should illustrate the basis for my concerns about the income report. In this graph, it should be apparent that when Rhode Island's employment weakened, then began falling after 2006, wages and salaries fell from about 22 percent of personal income to a low of about 16 percent. As everyone knows, because Rhode Island's employment peaked so early (December of 2006, a full year before the US), this produced the very high unemployment rates we have been burdened with for years now. The "bright" side of this, if you want to think of it this way, is that this high unemployment ushered in substantial increases in transfer payments (also for food stamps and welfare), moving transfer income from about 17 percent of personal income in late 2006 to about 21 percent in 2009 and beyond. 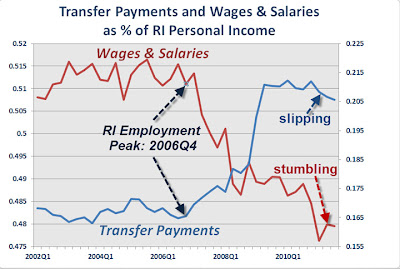 The result was some offset to the lost wage and salary income which made the recession here less deep and severe than it might otherwise have been. My concern, however, is what has begun to occur during the most recent quarters: employment has remained very week here, causing wage and salary income to remain at a reduced percentage of personal income at the same time that increasing numbers of Rhode Islanders are exhausting their unemployment insurance benefits (many after 99 weeks of benefits), which is causing entitlements to fall relative to income. In other words, these two are no longer offsetting. Weakness in each is reinforcing declines in the other. This bodes very badly for income growth in future quarters, especially our ability to sustain the strength in retail sales we observed in the last part of 2011.

Looking forward to the remainder of 2012, this becomes yet another question mark for Rhode Island's economic future. As employment here remains about 7 percent below our late-2006 employment peak and our state's unemployment rate stays in the "top five" nationally, things here continue to look very weak overall, in spite of occasional improvements in our cyclical performance. But is the existing labor market date that lies at the heart of all of this accurate?

Historically, in the year following upward date revisions, which we saw last year, the data are revised lower. I refuse to believe that when the next round of labor market rebenchmarking occurs in late February these atrocious numbers will remain or be made worse. IF that occurs, and I truly hope it doesn't, I will have a great deal more to say about what Rhode Island needs to be concerned with and the pace at which our leaders will need to start dealing with our structural problems.  Stay tuned!

Posted by Leonard Lardaro at 10:02 PM