The Long View of New Home Construction in Rhode Island

New home construction has always been a critical part of Rhode Island's economy. It's not hard to see why that is the case. The economic effects of housing are very substantial, as there are the both the direct effects of the actual building, not the least of which concern job gains, along with secondary and tertiary effects dealing with further additions to employment along with the retail sales of appliances, furniture, carpets, etc. Anyone who examines the behavior of retail sales must consider the relative strength of housing, as these are strongly and positively correlated. Furthermore, new home construction is highly cyclical, meaning that it fluctuates more than does the overall economy.

Once upon a time, new home construction in Rhode Island was very strong, as it provided our economy with major boosts, both when recessions ended and as recoveries progressed. Of course, there was always a downside as well: during recessions, new home construction would fall substantially, exacerbating economic woes as economic activity deteriorated based on the direct and indirect effects involved.

How good were "the good old days?" How do those days of old compare to what we have seen the last few years? A picture is worth a thousand words here. The graph below shows Single-Unit Permits (i.e., new one-family homes) in Rhode Island since the 1980s (click to enlarge). Think of this as new home construction in Rhode Island. 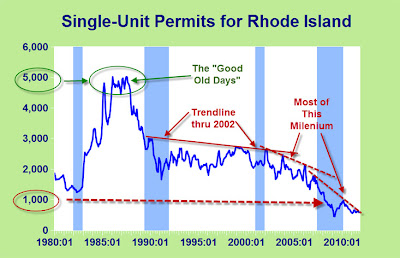 Note the rapid and large rise in new home construction during the first part of the 1980s, moving from around 1,600 annual units in 1980 through a peak period of about 5,000 annual units during the 1985-1987 period. Look at that as long as you want -- we will never see the likes of that again here! In order to have such strong housing momentum, it is necessary to have two key ingredients that have been conspicuously absent here of late -- a rising population and substantial job creation.

You can see that the long-term decline in new home construction in Rhode Island began around 1987, the year of a major stock market crash and the last year during which Rhode Island was a manufacturing-based economy (a link to my web site on this). New home construction then began a precipitous fall from around 5,000 annual units all the way down to 2,000 annual units. As bad as that was, at least Rhode Island stabilized at that now-lower level for many years, through the very end of the last millennium.

What I find very striking about this history is how it is accurate to gauge Rhode Island's new home construction as "stepping down" since 1990. Note the trendlines in the chart above. Not only are these all downward sloping, their steepness continues to increase through time. Should that be surprising, given that Rhode Island is the only state for which population has been continually declining since July of 2004, the effects of which are clearly reflected in this chart?

During the depths of "The Great Recession," Single-Unit Permits here fell to as low as 33 units on a monthly basis, or 396 annual units. As I write this, the November 2011 value was 53 monthly permits, which translates to 636 annual units. So, it's not difficult to imagine that things can't get worse than what they are now.

What can we expect to happen when the US housing market at long last begins to improve? While you might think this should propel new home construction here back toward the 2,000 annual unit level, I don't see how this can actually occur. What would be our engines for such growth? I don't see our population ending its disturbingly long decline. And, given the lack of skills of our state's labor force, where would the jobs that would be suitable for all those persons with inadequate skills come from?

To repeat a quote from the Addams Family movies applied to Rhode Island: "Be scared, be very scared." Why? Because when the national housing market improves, it will be much easier for skilled Rhode Islanders to sell their homes here and move to states and regions that have far more favorable employment (and earnings) prospects. That, of course, will further exacerbate the skills deficiencies of Rhode Island's labor force. Even worse, Rhode Island will find itself losing persons who pay substantial taxes and who tend to not rely much on government services. That, of course, holds the potential to prolong and very possibly exacerbate Rhode Island's fiscal woes in coming years. Three guesses what the implications of those changes are for Rhode Island's housing market in coming years?
Posted by Leonard Lardaro at 11:49 PM