RI Manufacturing Wages During This Recovery

Perhaps the biggest surprise of this recovery for Rhode Island has been the performance of our state's manufacturing sector. While manufacturing employment here has been declining for quite some time, "The Great Recession" seriously reduced the length of the workweek. So, as our manufacturing sector's workweek returns to more "normal" levels, total manufacturing hours worked (an indicator in my Current Conditions Index) has continued to improve. As of March, it has improved for ten of the last eleven months. Frankly, I didn't ever think I would see such positive momentum in total manufacturing hours again, but Rhode Island, like the nation, is seeing substantial strength in manufacturing that has made that sector a leader in this recovery, and the workweek was badly beaten down during the recession.

For quite some time, Rhode Island's average manufacturing wage has been well below the national average, and far below the levels in MA and CT. While our state's average hourly manufacturing wage in current dollars has shown significant increases during this recovery (which I date as beginning in February of 2010 using my Current Conditions Index), the same has not been true when our state's manufacturing wage is adjusted for changes in purchasing power. The chart below shows this all too clearly (click to enlarge): 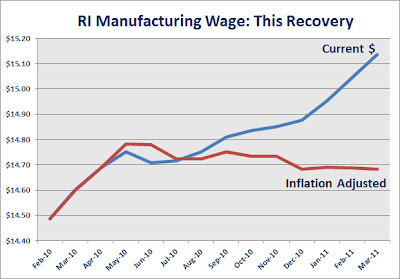 After very sharp increases in the first few months of this recovery (February through May of 2010), Rhode Island's inflation-adjusted manufacturing wage has been continually falling. This is not a good thing for our state, even though values for the most recent months have been adversely affected by rising food and energy prices. The implications for state income gains are not promising, and this might prove to be yet another weak point as our state moves toward yet another large budget deficit in FY2010.
Today's quiz: When was the last year that Rhode Island manufacturing employment rose?
Answer: 1984.
Posted by Leonard Lardaro at 4:23 PM