Retail Sales in Rhode Island Since the Last Recession

One of the most critical elements that determines Rhode Island's economic momentum is retail sales. Retail sales drives a great deal of economic activity here while itself being determined by how well the overall economy does. Remember, too, that sales tax revenue is an important source of Rhode Island's overall tax revenue.

Retail sales have done better since Rhode Island emerged from its last recession in February of 2010. But, like so many other economic measures, its behavior during this recovery has been choppy at best, reflective of the fact that our state's rate of growth has recently begun to slow.

The best way to analyze retail sales is to take inflation into account. Doing this we obtain real (i.e., inflation-adjusted) retail sales. I have calculated these so that the most recent month of data, April 2011, is the base period (the basis for comparison). The chart below shows real retail sales for Rhode Island since 2007 (click to enlarge). 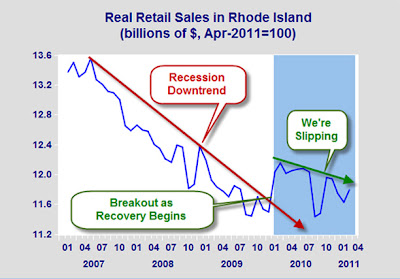 The most striking feature of the performance of retail sales since 2007 is how far they fell. A quick look at the graph also shows rather disturbing trends not only in their rate of decline but the duration over which their decline occurred. All of this is a testament to how severe the last recession was. It wasn't given the name "The Great Recession" for nothing! From this chart, it should also be fairly easy to grasp one of the reasons why tax revenue here declined during the last recession and has only recovered a bit during this recovery.
During the last recession, real retail sales moved into a downtrend in June of 2007 that lasted for over three years. The "breakout" from this prolonged downtrend, which coincided exactly with the beginning of Rhode Island's current recovery, occurred in February of 2010.
In more "normal" times (I have forgotten what those actually are by this point), we would have seen a fairly rapid rebound from such a precipitous decline in retail sales. But in those times "leverage" was rampant as credit, whether credit cards or home equity lines of credit, were used without a second thought, banks were very generous in their lending, mediocre credit scores weren't much of an impediment, and collateral was something that persons had to have back in the dark ages. But that was then. The chart above shows now -- not a very substantial recovery in real retail sales. After an initial jump, real retail sales began to fluctuate, largely sideways but trending slightly downwards, meaning that the value of retail sales has barely kept up with inflation. The same has been true for manufacturing wages here (see previous blog post on this). The recent slight downtrend also illustrates that the pace of economic activity in Rhode Island has been slowing of late.
Will real retail sales here break out from the most recent downtrend? Several factors could allow this to occur, namely low interest rates and ongoing national and state recoveries. However, the low and declining interest rates themselves reflect a slowing in the pace of national economic activity. Add budget problems in RI (sorry to be redundant) and for the US, and pension woes that must be addressed, and it becomes apparent that it is largely the underlying cyclical momentum of the US and Rhode Island economies that will largely determine whether a breakout occurs. Should these factors fail, our state faces the prospect of a breakdown below the recent trend, potentially eliminating some or much of the relatively small recovery gains we have experienced over the last year. Should that occur, revenue "surprises" will quickly become disappointments. Let's keep our fingers crossed that this is not what occurs. We already have enough on our state's plate as it is!
Posted by Leonard Lardaro at 3:48 PM