How Many Jobs Are Being Created in Rhode Island?

The media often mess up the reporting of monthly (payroll) employment numbers. Each month, we are given a figure stated as being either jobs gained or jobs lost, which is actually neither. The most recent example of this was in today's ProJo Consumer section. John Kostrzewa, a very capable journalist, fell into this trap. His column on the current Rhode Island recovery stated:

Fortunately for Rhode Island, this assessment is far, far off the mark.

To understand this, it is necessary to recall that in a post-manufacturing economy like that in Rhode Island (we made that transition all the way back in Q4 of 1987), job gains and job losses occur simultaneously each month. So, what is typically reported as either being job gains (if the overall change is positive) or job loss (if that change is negative), is in fact the net change in the number of jobs, or the overall change in the level of employment. The chart below, which gives the number of jobs gained and lost each month for the last year, will help to clarify this (click to enlarge it). 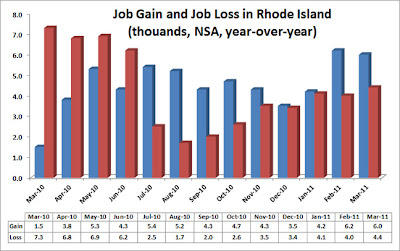 So, in spite of what you might hear or read, Rhode Island is currently adding jobs, and at a pace close to its highest level in quite some time. The flip side is that while monthly job loss has fallen a great deal from what it once was, job loss has been rising since August of 2010, nullifying much of our state's job gains.

Can you figure out what the largest gap between job gain and job loss (August 2010) in the above chart signifies? The answer is the most recent peak in payroll employment. What the employment report stories on Friday apparently failed to note is that while jobs have been increasing of late, so too has job loss, so overall employment has been moving sideways since last August.

Three final points need to be made. First, job gains and job losses are not "givens," beyond the control of anything we do or our state's tax and cost structure. These values are the direct result of a host of factors. Some are beyond our control, like the rate of national economic growth. But most are affected by what we have or haven't done to make Rhode Island a viable place to do business, policies that are critical in the decisions of firms to either locate here, or if already here, to expand their operations. Second, the way Rhode Island balances its long string of budget deficits will directly affect future values of jobs lost and jobs gained, and hence overall employment change. Finally, overall tax revenue is significantly influenced by the pace of employment change. So, to the extent Rhode Island is able to make employment growth higher than it would otherwise have been, future tax revenues will be higher than otherwise. Will this guarantee lower future deficits? Sadly, the answer is no. If our leaders opt to "spend up" to the higher tax revenue, probably little if anything will change.

I have heard a number of our state's leaders refer to themselves as a "new brand" of leader. Until or unless they demonstrate that they will not "spend up" when revenues rise and that they are willing to reign in spending to sustainable long-term levels, I will continue to view them as  little more than the tired brand we've been stuck with for years, Brand X.
Posted by Leonard Lardaro at 8:23 PM