Scary Questions about R.I.'s Economy (from the ProJo 10/9/2010 as I originally wrote this plus a labor market chart)

Everyone seems to gauge overall economic performance by the recent performance of the unemployment rate. If you listen to the media and my many of my fellow economists, you will frequently hear that the only way the unemployment rate can decline is for employment to begin rising substantially from where it is today. These newly added jobs will then directly reduce unemployment, leading us at long last to a period where the unemployment rate is well below its current levels. There are two potential difficulties within this scenario, which explains why this process is taking so long. On the labor supply side, much of the current unemployment is long-term in nature, the result of jobless persons failing to possess the skills demanded by the employers who are attempting to increase employment. Economists refer to this as "structural unemployment." The result is skill shortages, even with so high a jobless rate. On the demand side, employers have continued to find ways of meeting current product demand with fewer hours worked by their labor force than they thought possible in the past. This has produced rather sharp gains in productivity. The failure to hire by small and medium-sized firms has been exacerbated by their inability to borrow funds due to inadequate collateral. And, of course, uncertainties about the future also play a role, for firms of all sizes.
But is this the only possible scenario? And, how does all of this pertain to Rhode Island? Actually, employment gains have been occurring here for several months now. Since October of 2009, job gains have generally been above 1,000 each month (except for April of 2010). In fact, over the October 2009 through August 2010 period, Rhode Island's average job gain (year-over-year) has been just over 2,000 per month (see chart below -- click to enlarge it). How can this be with so high an unemployment rate? The answer is that while job gains are occurring, so too are job losses. From October 2009 through August 2010, monthly job losses for Rhode Island averaged around 15,250. Thus the proper context for analyzing overall employment change in Rhode Island is a simultaneous focus on job gains and job losses. While monthly job loss has declined sharply since the height of the post-2008 period, job gains have increased very little. But they are increasing. So, the question becomes what will be required for Rhode Island to generate substantial and increasing job gains? 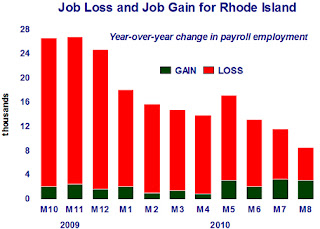 A viable response to this question requires that we confront what I view as the two scariest questions about Rhode Island's economy at present. First, does Rhode Island have a tax and cost structure consistent with generating the types of employment gains needed to substantially reduce unemployment? Second, what are our current engines of job growth? Importantly, these questions are not unrelated. Our children have known the answers for years. Ask them when they come back to Rhode Island to visit. The answer to the first question is not yet, even with the two-year-delayed tax reforms. As for the second question, our engines of growth at present are health services and tourism. While a small but growing tech sector is helping us, past failures of economic leadership here have relegated non-defense tech to levels that require time before they can make a substantial impact on our state's overall rate of growth.
Fortunately or not, for Rhode Island there is another way we can and likely will witness material reductions in our jobless rate. Rhode Island has a very high labor force participation rate, the proportion of our (non-institutional) working age population that is in the labor force. At present, Rhode Island's participation rate is just under 69 percent, a rate almost five full percentage points above the national rate. Over the past five months, as Rhode Island's unemployment rate fell from 12.5 percent to 11.8 percent, its labor force participation rate also fell. This indicates that some of our state's unemployed stopped looking for work over that period. Based on the way labor force statistics are calculated, they were no longer counted as being in our state's labor force. So, as increasing numbers of Rhode Islanders exhaust all benefit entitlement, if they then stop seeking employment, as is likely, our state's unemployment rate could potentially decline substantially from its current level, even without large employment gains.
June marked the third anniversary of Rhode Island's current recession. We have been through a great deal since our recession began in June of 2007. Perhaps that understates things a little (if that is possible) since our employment peaked in January of 2007, almost a full year before the national peak. Things never had to be this bad for Rhode Island. Is the second way I suggested for reducing our state's unemployment rate the best we can do? I refuse to believe that.
November's elections hold the potential for our state to make meaningful changes to the way things are done here. Voters must ask very difficult questions and demand highly specific answers to anyone running for statewide office. Sorry, wish lists don't work here!
The upcoming election is more important than is generally presumed for Rhode Island, since federal bailout money will no longer be available by this time next year. Fiscally, this will force us to go "cold turkey." The resulting jolt to a fragile upturn may well force our state into a double-dip recession. The citizens of this state need to be proactive, even though our elected officials seldom are.

Posted by Leonard Lardaro at 10:19 AM