Welcome to this Blog!

This is the first of what promises to be many posts to this newly created blog that will detail my views about economics and the Rhode Island economy using the tools of the internet. Unlike what I have been able to provide to the local newspapers over the years, this blog will include graphs, tables, videos, and other media-relevant tools that will allow me to communicate in a far more visual way than I could ever do in newspaper articles. Those who have come to my presentations over the years will already be familiar with the types of tables and graphs I will provide here. But, unlike what I am able to say to the local media, I will come far closer to stating what I really think in this Blog. The stakes now are far too high for us to sustain the way things are being done here.

Through time, I will publish articles that what I would have submitted as Op-Ed pieces to local newspapers in this blog. At times, posts might consist only of questions that need to be discussed and answered by others in this state. Let me state that I fully intend to provide realistic analyses of where Rhode Island's economy is and where it is headed, as I have done for years.

To a number of our state's "leaders" over the years, my efforts to do this have always been viewed as "being negative." But if we don't critically and honestly evaluate both the strengths and weaknesses of our state's economy, how can we realistically expect to make it better and stronger, able to move forward competitively? We didn't do this over the last decade, especially when we finally got back on our feet in the late 1990s when we had a clear window of opportunity (see my article from 1999  and the report card I proposed that our legislators use). The result was that we were "flat footed" during the worst recession this state has faced since 1991!

It is reasonable to ascertain that the persons who have labelled me as being negative are the image of what this state defines as being "positive." If impeding efforts to make this state more competitive in the future when we had a chance to do so, then abandoning the people of this state during its worst economic crisis in twenty years is Rhode Island's definition of "positive," then please do label me as "negative."

Consistent with using internet tools, let me present two graphs that scared the hell out of me from the moment I first created them (click to enlarge them). I knew things had been very bad here, but never this comparatively bad. I generated these while writing an article about Rhode Island's high unemployment rate for a Boston Federal Reserve Publication. If I had to name these, the first would be CAUSE, the second EFFECT. 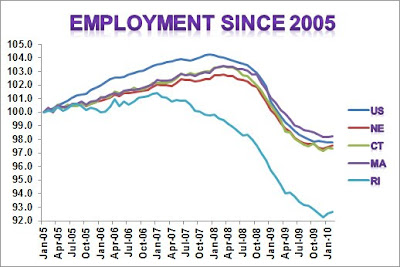 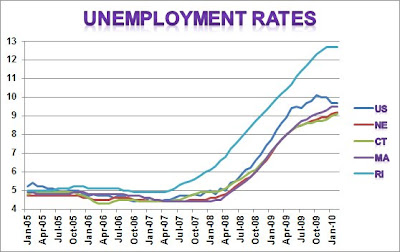 I hope you are as mad and upset about what these graphs show as I am. They get my vote as being a functional definition of a state that is an economic "basket case." Remember, it never had to be this bad here. The failure of collective economic leadership in this state over the last decade is what made Rhode Island so vulnerable to national and global economic weakness. Existing structural problems, the manifestations of which are listed below, allowed our state to move from its usual doldrums into "afterburners." Consider the following "stylized facts:"
Rhode Island's current problems therefore have a very large structural component. Don't let any state politician tell you otherwise. If one of them tries to say this, or their new favorite: "We're all in the same boat,"confront them with the reality that we are indeed different in a number of fundamental ways from other states.

Let me end my first blog post with the way I view the "positive" people among those who run our state. Anyone currently in office who says that you should always view the glass as being half full is expendable. Any non-incumbent who utters this should be considered irrelevant.
Posted by Leonard Lardaro at 1:21 PM